The Royal Institute of British Architects (RIBA) has named Cork House, an ingenious carbon-neutral private house in Berkshire, made almost entirely from cork, as winner of the 2019 Stephen Lawrence Prize.

Cork House, by Matthew Barnett Howland with Dido Milne and Oliver Wilton has solid structural cork walls and a cork roof. All the cork components simply slot together, without glue, enabling them to be easily disassembled, reused or recycled. Located in the grounds of a Grade II listed 19th century mill house, it beautifully reflects and respects its natural surroundings.

The Stephen Lawrence Prize aims to encourage new, experimental architectural talent, celebrating and rewarding projects with a construction budget of less than £1 million.  First awarded in 1998 in memory of Stephen Lawrence, who was taking steps to become an architect before his untimely death in 1993, the £5,000 Prize has been sponsored by the Marco Goldschmied Foundation since its inception.

“Cork House is a unique fusion of ancient construction methods and cutting-edge technical research to produce a highly innovative, low carbon solution with a wide variety of applications from mass housing to emergency shelters. We are delighted to present Matthew Barnett Howland, Dido Milne and Oliver Wilton with the Stephen Lawrence Prize 2019.”

“In addition, the judges and I would also to give a special mention and £1,000 award to an ingenious and beautifully detailed family home on the site of a tumbledown double garage, Pocket House by Tikari Works.” 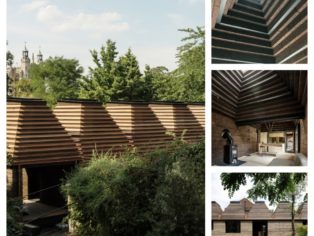