Construction data for May showed that new orders across the industry increased at the fastest pace since the PMI (Purchasing Managers’ Index) first began collecting data in 1997, with the majority of firms surveyed predicting a continued rise in business activity.

IHS Markit, which compiles the survey, said that the figures for May showed that the UK construction sector “remained on a strong recovery path, with output growth reaching its strongest level since September 2014, and housebuilding being the healthiest sector. ” The data also showed however that “input cost inflation” was at a record high, “reflecting a surge in demand  for construction materials, and severe supply shortages.”

The PMI ‘Total Activity Index’ for construction registered above the 50.0 ‘no change’ value for the fourth consecutive month, at 64.2, up from 61.6 in April, signalling the “strongest rate of output growth for just under seven years,” said IHS Markit. A total of 61% per cent of firms surveyed predicted a rise in business activity over the next 12 months.

Housebuilding (with a score of 66.3) was the best-performing category in May, but the commercial sector at 64.4 showed its steepest growth in activity since August 2007. This “reflected strong demand conditions following the reopening of customer-facing areas of the UK economy.”

The latest survey “pointed to a rapid upturn in new business across construction,” said IHS Markit. Nearly half of the firms surveyed reported higher volumes of new work (47%). while only 11% saw a reduction. Construction companies attributed the surge in orders to “strong demand for residential building work and high levels of confidence about the near-term economic outlook.”

These positive conditions led to a “marked rise in staffing numbers,” with the fastest rate of new jobs created since July 2014. In addition, purchasing increased steeply, with some firms noting that stockpiling due to supply shortages was a key factor. Suppliers’ delivery times were reportedly lengthening “sharply,” in the second most acute downturn for delivery since 1997.  This was being driven by “stretched supply chains and steep rises in raw material prices.” 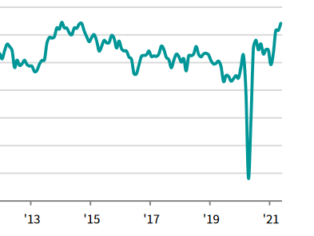