Henley Halebrown’s Chadwick Hall project comprising of three residential halls for the University of Roehampton (London) has made the Royal Institution of British Architects’ (RIBA) Stirling Prize 2018 shortlist. The Prize is awarded annually to the best building in the UK.

“We are delighted that our project for the University of Roehampton – Chadwick Hall – has made this year’s Stirling Prize shortlist. For us it is important that contemporary buildings point to a strong public life and a commitment to social values. We hope that the ways we have sought to resolve these aspects of architecture in our work have led to this important recognition from the RIBA.”

The Stirling Prize is judged against a range of criteria including design vision and capacity to stimulate, engage and delight occupants and visitors.

“It doesn’t go unnoticed that half of the buildings were commissioned by UK universities, suggesting that parts of the higher education sector value the importance of improving the quality of their buildings and estates to reward and attract students, staff and visitors, and to make a positive contribution to their local area. It’s encouraging to see clients who recognise the broad range of benefits that can be achieved by working with skilled and resourceful architects, and I hope more public-sector organisations will follow their lead.”

Chadwick Hall, University of Roehampton
Chadwick Hall is made up of three residential halls for the University located in southwest London. They are situated next to the site where “The Watchers”, a three-part Grade II listed bronze sculpture by Lynn Chadwick (1914-2003) that was recently reinstated (one of the three pieces was stolen in 2006).

The design of three residential halls is a poetic response to the existing architectural setting of the Roehampton campus. This includes fine Georgian buildings as well as much feted post-war municipal housing by London LCC Architects Department.

“In both plan and elevation these two historic precedents inform our approach. We were particularly inspired by the way in which the existing buildings – both old and more recent – are designed within an informal English garden-like context.

We are also the masterplanners for the university and our work at Chadwick Hall exemplifies how we envision the future development of the academic campus as referring back formally to its collegiate roots.”
– Henley Halebrown, July 2018

The RIBA panel felt that the architects managed to create a welcoming and calm space by careful masterplanning responding in turn to the street and the listed building structures as well as the wider landscape and the Modernist building to the perimeter of the site. The panel described the scheme:

“This is a good example of timeless architecture. It is inspiring while remaining simple. The scheme’s success is also based on a skilful master plan with sensitive arrangement of the blocks within the landscape, existing listed building and the restored sunken garden. The concept is a nod both to Georgian architecture as well as to a Modernist block of flats to the Northwest boundary of the site. The design becomes a backdrop for the listed building and the sunken garden. It gives them the importance and provides a setting for social gathering. ” 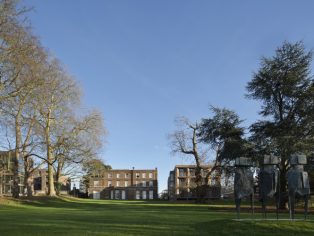