Developer Firmstone’s proposals to kickstart the long-awaited regeneration of East Street at St Catherine’s Place have been approved by Bristol City Council.

The plans will deliver 180 much-needed homes, newly refurbished retail units on East Street and increased public open space including a pocket park, a children’s play area and a new, landscaped walking and cycling route through from Dalby Road to Mill Lane.

Designed by Bristol architects Stride Treglown, the mixed-use scheme will offer a full range of one, two, and three-bedroom homes in three new buildings on the site, including a 14-floor building on the corner of Dalby Avenue.

An ‘East Street First’ approach has been taken to regenerating the retail spaces, with existing shops on the East Street side of the development being replaced with new, modern shops and the historic façade refurbished or rebuilt. This will breathe new life into the area and mark the start of the area’s retail revival, particularly given the increased footfall to and from the new development.

“This is brilliant news for the future of this important part of Bedminster and for East Street. We can now get going on the regeneration of St Catherine’s Place and start delivering the homes and investment the area so badly needs, as well as supporting the revival of East Street.”

“We believe our proposals will create a step-change for the area, creating a real focal point for the local community, as well as generating jobs and supporting local businesses and providing 180 new homes for the city.”

“I’d like to thank all the local residents and retailers who supported our proposals, as well as Mike Orr from CSJ Planning and Council officers who worked with us over the past few months and look forward to creating the fantastic new neighbourhood that Bedminster deserves.”

Firmstone is also making nearly £1.25 million of community contributions, partly via the Community Infrastructure Levy (CIL) and in relation to wider transport improvements.

A new open-air pedestrian route, Mill Lane Greenway will provide a direct link between Bedminster Green and East Street. Designed to celebrate the area’s industrial heritage, it will include planting, cobble stones and historic mill stones recovered during archaeological investigations on site.

CSJ Planning acted for Firmstone as the planning advisors. 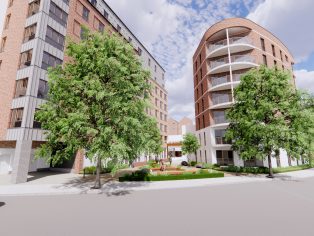