The movement to build ‘eco’ has led to greater focus on the importance of insulation, but the industry needs to ensure projects are built ‘as designed’ says Recticel’s Peter Wilcox.

The final Evidence Review Report produced by the Zero Carbon Hub revealed a gap between the designed and as-built energy performance of new homes.  Poor installation of domestic services, incorrect construction of building fabric and sub-standard implementation of site quality assurance procedures are among the reasons attributed to the gulf between anticipated and actual thermal readings.

The Hub (which ceased operations in April) was originally tasked by the Government to help deliver zero carbon UK homes. This policy was however scrapped by the UK Government in 2015 which led to the ending of the body tasked with instigating it.

However in the Zero Carbon Hub’s report, it cited the issue of products being installed with energy performance different to the intended design as a reason for a building’s thermal efficiency falling short of expectation. This issue requires manufacturers’ urgent attention if the Government is to succeed in its ambition to demonstrate at least 90 per cent of all new homes meet, or perform better than, their designed energy/carbon performance by 2020.

Polyisocyanurate (PIR) insulation panels satisfy two vital factors for designing effective insulation for new and existing buildings to perform as designed – low thermal conductivity and durable performance. We have harnessed these low-energy long-term properties to create a ‘next generation’ prefabricated room-in-a-roof system. Capable of being installed in a matter of hours, it enables safe and fast installation of a watertight structure while offering U-values of between 0.13 and 0.19 W/m2K – therefore capable of ensuring Passivhaus levels of airtightness.

Breather membrane, counter battens and integral structural timber, along with high performance PIR insulation, are all combined into lightweight cost-effective modular roofing panels. Assembly involves vapour-permeable underlay felt being pre-glued with self-adhesive overlaps. Counter battens are fixed to the panel while the multi-layered facings act as a vapour and air barrier on the inside. Timber rafters incorporated within the core offer strength for self-support. During the production process, foaming takes place around the rafters which means the panels are completely airtight as well as highly vapour resistant.

A recent innovation to the UK construction market, the system was specified and installed at an eco-house in the heart of Hampshire’s New Forest. The 200 m2 detached, four-bedroom home located in Burley was designed and built by architect Nick Lacey using passive and active solar techniques and is the first house in the UK to use the L-Ments prefabricated system. The architect specified its use as he required a rapid-build, thermally-efficient roofing system to fully waterproof the partially-built home and accelerate construction.

“The roof’s prefabricated element was key to its specification as I urgently needed to speed up building works on this project. It is built for rapid installation as well as containing all the necessary thermal properties to ensure the completed house meets the near-zero carbon standard.”

Ultimately, it’s the homeowner who pays the price for a building’s thermal inefficiency. The average UK household spends around £1,230 on fuel bills each year which can be up to 50 per cent more than is necessary due to the lack of energy-saving measures being implemented in the home. High performing PIR insulation is increasingly being viewed by specifiers as the practical, long-term solution to energy wastage.

Innovative systems, such the prefabricated room-in-a-roof system we have developed, have added another dimension to insulation in terms of how it can be applied and the overall thermal result it can help to achieve.

Peter Wilcox is a development manager at Recticel Insulation 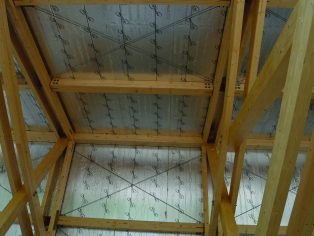