Brick, the hero of our built environment

Just because a material was developed 9,000 years ago does that make it old fashioned? Apparently not, as brick is enjoying something of a renaissance. The Brick Development Association explains further.

To those of us who work in the industry the continuing popularity of brick is not surprising on the grounds of pure functionality. Ideally suited to our damp marine environment, brick remains weatherproof for generations, needs no maintenance and its colour does not fade over time.

Given the unarguable performance of the material, the choice to use anything else will generally be made on aesthetic grounds and the sheer variety of options naturally leads to experimentation.

Year after year surveys are produced reinforcing brick as the preferred building material for house buyers across the UK, but we can also see evidence of its use for the positive advancement of urban design.

A great example of this is located in the heart of Clerkenwell, East London. The Turnmill building is a seven storey structure comprising offices amongst a context of ornate brick warehouses and directly opposite the old Sessions House.

The choice of brick colour in this structure echoes the hues of the stone of the old Sessions House. The quality of the brickwork detailing is exceptionally high, this coupled with the selection of the thin linear brick and the slender column design gives a modernistic framework using a traditional material in a uniquely innovative and attractive manner. This building is a testament to the successful and fruitful relationship between designer and developer. The subtlety of the building and its deceptive simplicity and avoidance of visible movement joints show the depth of thought in the design of this building.

Although extremely welcome, architectural landmarks will only ever account for a relatively small percentage of the brick used in our urban environment. It is the overwhelming preference for brick in domestic architecture that accounts for its ubiquity in our living environments.

The Darbishire Building, designed by Niall McLaughlin architects, is a fine example of a well-executed residential development, firmly rooted within the London Vernacular. The Whitechapel-based social housing block offers a reinterpretation of classic masonry, built in place of an original Victorian Peabody building which was damaged during World War II. The block brings a modern, re-energised feeling to the area.

The block was built to fit effortlessly into the surrounding area, while maintaining a priority for creating an affordable environment. The building is simple and direct, without fuss, frivolity or fancy, yet there are moments of architectural delight which become apparent. For instance, the window surrounds subtly project and taper precast architectural stone trim, and bring sensitive articulation to what would otherwise be a less interesting building. Two zones of stacked corner balconies are designed with a bespoke precast tapering blade column, which accentuate the relationship of the building users to the public realm they face.

We must also remember the huge contribution this material makes to restoration. An interesting example of a residential refurbishment project is The House of Trace.

The House of Trace, a private family home, designed by Tsuruta Architects was developed keeping a memory of the original building, but simultaneously allowing for the new build to form its own identity.

Older facets of the house were preserved or recreated in the architecture creating an interestingly sensitive approach to the refurbishment of an end of terrace house, reinventing the type through approach to the new and retained material, both on a diagrammatic and a detail level. Instead of treating the existing building as a blank canvas, the architects viewed the project as a picture to be expertly restored.

Recent projects recognised at the Brick Awards served every purpose from the construction of educational and religious buildings right through to homes and commercial establishments. This fact alone shows the influence brick still holds; its repeated specification by architects demonstrates a lifelong relationship of respect. The universal appeal reveals a simple truth, brick’s involvement in architecture isn’t going anywhere.

Foundational to excellence, suitable for a huge array of different projects and capable of bridging the gap between the past and present, brick is certainly a key component to great architecture. 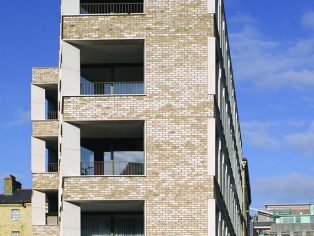