Two members from Arup’s Nottingham office have been appointed as directors of the global engineering firm, representing a huge achievement for the company’s presence in the city.

Steve Fernandez and Vicky Evans are just the second and third members of the Nottingham team to have both been promoted to one of the firm’s highest positions, signifying their knowledge and expertise in their fields and future potential.

Between them, the pair have worked on major local, national and international projects, including the shopping and food destination Coal Drops Yard in King’s Cross, the stunning St Pancras Chambers development in London, the Defence and National Rehabilitation Centre near Loughborough, and the Government’s £3.6 billion Towns Fund.

“We are absolutely delighted that both Steve and Vicky have been promoted to director– a huge boost for us in the region and indicative of the hard work and expertise they put into the business.”

“The interview process for the role is extremely rigorous, and for the Nottingham office to have two directors appointed is a huge achievement. We’re very proud of the work we do from Nottingham – we’ve been here for 30 years, we’ve got more than 100 staff based in the city centre and we are highly committed to the city.”

Steve joined Arup as a graduate in 1999, working in Sheffield, London, Doha and Moscow and is now based in the Nottingham office. He is recognised internationally as an expert in his fields, leading the firm’s civil and structural engineering team across the Midlands, and is the building retrofit leader across the UK, Middle East, Africa and India.

He is also passionate about educating the next generation of engineers, acting as a STEM ambassador, and has been recognised as an ‘inspirational UK BAME innovator in science and technology’ by UKBlackTech and Goldman Sachs.

He has designed and delivered a variety of iconic buildings and structures, ranging from a new school in Loughborough, the transformation of the listed Newton and Arkwright buildings at Nottingham Trent University, a 60,000-seat football stadium in the Middle East, a state-of-the-art research and university campus in Moscow, and a timber pavilion inspired by school children which was on display in Old Market Square in Nottingham.

“It is a huge honour to be appointed as a director of Arup. Having worked in the Nottingham office for many years now, I’m relishing the new opportunity and helping the industry and our clients following the challenges of the last year. I am a designer at heart – I love design and working with clients to develop an idea and then seeing our work come to fruition is a great pleasure of the job.”

Chartered town planner Vicky joined Arup in London in March 2006 and since then has also worked for the company in South Africa, Dubai and the Seychelles. Having studied geography at the University of Nottingham, Vicky said she has always had a strong connection to the area and decided to move back to the city in 2015.

A specialist in housing, strategy, policy and economic development, Vicky works across all aspects of the built environment at a regional and national level. She also leads the residential business for Arup across the UK, Middle East, India and Africa.

“My work has become increasingly strategic, meaning that I’ve been able to influence decision-making at the very early stages of a project, which is really exciting. I’ve been doing a lot of planning and strategy work in the East Midlands – which is indicative of our region really putting itself on the map.”

As well as her work on the groundbreaking Defence and National Rehabilitation Centre at Stanford Hall, Vicky has been working with the government on the Towns Fund, which is investing billions in UK towns as part of the levelling up agenda. She oversaw the development of 26 town investment plans in the Midlands and East region.

She was also involved in the establishment of the East Midlands Development Corporation, set up to create new employment and housing opportunities across three key sites at Toton, Ratcliffe-on-Soar and East Midlands Airport.

Vicky said she had enjoyed the ‘robust and challenging’ interview process which led to her promotion to director, which she said was ‘a real honour’.

“It shows great confidence in me and my leadership capabilities but also indicates that Nottingham and the East Midlands is an area for growth for Arup,. Our office has grown in size in the past five to ten years – testament to the draw of Nottingham as a place to live and work.”

“I’m looking forward to continuing to help clients solve their most complex challenges here – turning exciting ideas into tangible reality. Net zero, levelling up and improving infrastructure are all challenges we need sustainable, socially valuable and equitable solutions to, which are specific to the region.” 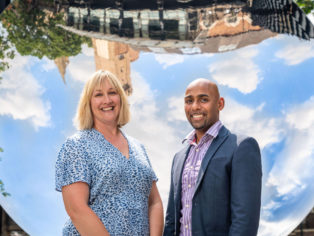 Vicky Evans & Steve Fernandez from Arup's Nottingham office, who have been appointed directors of the global engineering firm. © Ian Hodgkinson/Picture It