An Andrew Carnegie Library is brought back to life, where plum trees used to grow

This Grade II Listed Plumstead Library in the Royal Borough of Greenwich is of great architectural and historic interest. It is one of the earliest funded libraries by Andrew Carnegie, a Scottish/American philanthropist in the US and British empire in the time of Queen Victoria and Edward VII, which officially opened in 1904.

Following on from the Historic England listing in 2016, the Royal Borough of Greenwich decided to use the building as a champion for the Plumstead Urban Framework, making it one of the critical elements of the regeneration of the local High Street and surrounding area.

Occupying a corner plot on the busy A206, Plumstead High Street, with high volume traffic and London transport passing by, noise was of great concern. In addition, the single glazed metal framed original windows did little to prevent heat loss or draughts, which was going to hamper the sustainability of the building and add to the on-going running costs. As the building is Grade II Listed, the original windows could not be changed, so a reversible adaptation had to be found. Hawkins Brown Associates decided that Selectaglaze secondary glazing would improve the thermal efficiency as well as dramatically reduce the noise ingress.

On the north elevation, the library has two magnificent sweeping bow windows, which occupy the majority of the ground floor. On the first floor and the return elevation facing east, where the offices and museum once were, there are a number of metal single glazed windows in various configurations.

After months of highly skilled refurbishment works, the Library re opened in early 2020, providing the local community with spaces for health and fitness, sports, performing arts and library all under one roof.

With fifty years’ experience, Royal Warrant Holder Selectaglaze has vast experience of working with the intricacies of Listed buildings. 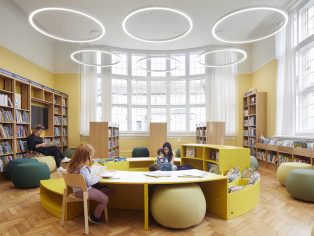