Linden Court is PRP’s response to the Greater London Authority’s call for exemplar housing designed for retirement living. Project architect Mark Walker spoke to Sébastien Reed about how the HAPPI standard was key to the project’s success

The Office for National Statistics estimates that by 2030, more than one-fifth of United Kingdom residents will be aged over 65, nearly seven per cent over 75, and 3.2 per cent pushing 85. Considering these together means that by the end of the decade almost one-third of the nation’s population will be senior residents.

Despite the fact that, in the words of the Greater London Authority (GLA), London is a comparatively “young city,” it is expected to follow the national trend and see its population age substantially. By 2029 the number of ‘older person households’ (aged 65 and over) will have increased by 37 per cent, with households aged 75 and over (also most likely to move into specialist older persons’ housing) increasing by 42 per cent. In view of this, Homes England has injected significant funds into specialist housing projects to support this demographic shift.

Answering the GLA’s general call for housing for older residents, Lewisham Council’s aspiration for a 0.5 hectare site in south east London was to develop exemplar accommodation to help satisfy the burgeoning demand for extra-care residences. ‘Extra-care’ describes accommodation with 24-hour on-site care provided to residents, and currently represents a market worth more than £2bn in the UK. In addition to the desired minimum of 50 rental units nestled into the site, the client also required that the building add value to the wider community.

Architect PRP was commissioned directly by Lewisham Council after putting in a bid for the project, the practice having had a strong presence in the retirement living sector since the 1980s, developing so-called ‘extra-care’ schemes. It now runs a 40-strong office in Thames Ditton which specialises in such typologies.

Linden Court houses a total of 35 apartments for rent and 18 for shared ownership – (a 66 to 34 per cent ratio). The scheme’s 53 units are distributed across three blocks arranged in parallel, plus a connecting block to the north, forming an E-shape in plan.

PRP’s Mark Walker lists several welcome by-products of the E-shaped footprint; four courtyards of varying character, a triple aspect for each of the apartments, and a sheltered entrance for the mews which provide residents with access to the communal areas of the building. Another, less tangible benefit to residents is the privacy provided by flanking walls which obstruct views into the development from nearby buildings.

“The form and massing create optimal orientation,” he tells ADF. The new block stands at four storeys, with the third floor stepping back from the facade on both the north and south elevations. This “acknowledges the scale of the adjoining residential development,” while creating terraces for larger apartments situated on the roof, PRP has provided generous views to residents and access to outside, with all apartments having balconies, terraces at ground floor level, or larger terraces at third floor level.

All of the flats are south-facing, as are two of the garden courts. The residents’ communal facilities, which occupy most of the ground floor of both the central wing to the south and adjoining block to the east, and are shared by older people from the wider community, are double aspect, opening onto south and north facing courtyard gardens. The two remaining gardens to the north are exclusively for residents.

Walker describes the architecture as “contemporary and robust,” with crafted, buff-coloured brickwork with deep reveals. He continues: “The scheme successfully integrates into its domestic setting; the rhythm of surrounding Victorian terraces is expressed across the street-facing facade through the fenestration and brickwork detailing.”

PRP took a sensitive approach to the language of the design; specifying brick to complement the adjacent residential developments. The subtle detailing on the facade rotates bricks 45 degrees in sections to link each balcony with its adjacent window; externally signalling each rental unit as a separate entity.

Aluminium timber composite windows are paired with fully-glazed cantilevered PPC steel balconies, which jut out at intervals across the buildings’ elevations. Slightly contrasting with the brick below, dark timber shingles clad the top floor, contributing to a reduction in the building’s mass.

The site sits directly adjacent to Chiddingstone House, which houses a four-storey block of maisonette social housing apartments built in the 1970s, and is just south of the new building. It previously included a large space to the rear set out as drying yards, storage sheds and a row of garages, which was underused by Chiddingstone House residents, and so was reallocated by Lewisham Council for the new development.

Consultation with the residents was undertaken, which included discussion on the re-provision of storage and the protection of the level of parking they formerly had access to. Walker credits this decision as one of the key opportunities realised on the site, resulting in “a revamped shared external space where parking is managed and children can play safely.” The architects hope that the scheme catalyses interaction between people of all different ages in the community.

The gardens for the later living block are enclosed by brick walls with a porous grate-effect; this allows light and glimpses into them from the shared external space, and invites members of the wider community inside. Walker notes: “The team was able to retain a hidden but substantial brick wall to the eastern boundary which now exudes charm into the little quiet garden at the rear of the site.”

Linden Court’s communal areas “needed to be welcoming and appropriately located so as to enable people from the wider community to utilise the facilities without compromising on the privacy of the residents,” says Walker. “A horizontal recess expresses a ground floor plinth and visually anchors the building; this detail extends to become a ‘hit and miss’ garden wall providing security and privacy for the courtyard gardens and forming a new mews space to its southern edge.”

He continues: “Dappled light can filter through to the garden, creating welcome shade and a soft, rather than divisive, relationship between the garden and the mews.” The architects intended the mews to function as a key node and meeting point for the scheme, offering space for community events, and meaningful intergenerational engagement.

With the elderly being a demographic seriously vulnerable to loneliness and social isolation, it was also important for the architects that the communal spaces inspired residents and visitors to socialise – “even a cafe bar has been integrated” remarks Walker. To the same end, a cinema, lounge, and hobby room also feature in the programme. Visual connections and direct pathways extend back into the gardens.

The UK Government’s ‘Housing our Ageing Population Panel for Innovation’ (HAPPI) standard was core to the project’s design. The standard is composed of a set of design criteria for designing spaces for an older demographic, foregrounding principles such as good light, ventilation, room to move around, and good storage. Walker explains: “The 10 HAPPI recommendations are all fully met in this design and, in our view, to the full benefit of the residents, the building owners and the budget.”

Aside from the features themselves, the architects also note the HAPPI standard’s unexpected benefits for the working team’s culture, commending it as a lever for embracing non-standard approaches for this typology: “It encouraged everyone involved to embrace what might have been considered to be ‘not the norm’ for this type of housing,” says Walker. He cites as an example, “the visual connection from the interior via glazing to what, on plan, might appear to be small gardens mean that the spaces can be enjoyed from all four levels of the building.”

The interiors at Linden Court “surpass London Plan requirements,” say the architects. Particular consideration was given to the experience of elderly residents potentially being inside their apartments over a 24-hour period. Overheating, views and access to natural light and ventilation all informed the design of the apartments, balconies and elevations. Heat and noise transfer from corridors and communal areas were also considered in terms of their locations and ventilation.

When it comes to care, smart Tunstall doors and emergency call systems are included in each apartment, aiming to give residents peace of mind 24 hours a day. Flats have also been designed with the option to be fitted with living aids such as grab rails or shower seats, meaning the physical elements of the interiors can adapt with residents’ changing abilities. This way, those living at Linden Court can remain more self-sufficient for as long as possible; aiming to grant them with an important sense of agency.

All areas of the building are fully accessible, allowing ease of use for those using buggies, wheelchairs or walking aids. A purpose-built buggy storage room just beyond the indoor communal area entrance allows residents to stow away their mobility vehicles. The scheme also features 15 parking spaces which run east to west through the centre of the site, in addition to a cycle block for bicycle storage at the western side of the site.

So that residents can navigate the building with more ease, the simple floor plan, along with clearly designed wayfinding, make the interiors well adapted to those with visual and cognitive impairments. Walker remarks: “It’s a place where people can ‘age in place’ knowing that the built environment will not limit their abilities, but will enhance and hopefully uplift their spirits.”

The result has turned heads within the housing community, with Linden Court being shortlisted for the Best Older People’s Housing Development at 2019’s Inside Housing Development Awards. For Walker, the building is “a true culmination of years of thought around how to incorporate the original HAPPI recommendations in a way which benefits those that live there, capital and revenue costs, and the ease of management and maintenance.” But, “above all,” the architect concludes, “Linden Court is a happy place to live.” 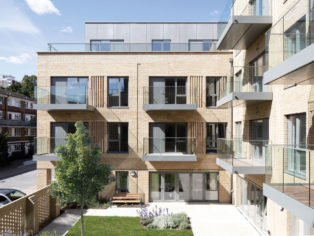 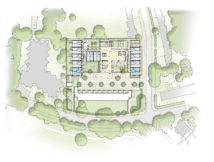 The new block stands at four storeys, with the third floor stepping back from the facade on the north and south elevations © PRP & Richard Chivers 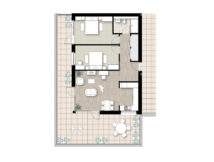 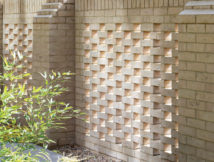