The Shard is omnipresent in London. If the architects had illustrated every view in which it stars, as part of the planning process, the resulting material would have been extensive.

To make a tower on such a tight site a thing of great beauty is a rare achievement. The architects have added immeasurably to its immediate environs and to London as a whole. Like the Gherkin, this is a tower that people who don’t generally care for modern architecture seem to like. It makes people talk about architecture. But there is much for architects to admire too: the way it meets the split ground level expressing its structure all the way; the way you keep seeing the structure from the inside of the building and the way the structure shines when it frames the views from the uppermost public platforms.

There cannot be a more compressed, nor exemplary, model for city intensification than this tower: 1.2 million square feet of accommodation built on a tiny parcel of land directly next to one of London’s major transport hubs. It has six uses each occupying multiple floors: health clinic, offices, restaurants, hotel, residential apartments and public viewing gallery: a genuine vertical village. All this touches the ground effortlessly with offices and viewing gallery, the high-volume uses, approached directly from a podium facing London Bridge Station, and the rest from street level on the opposite side.

Its three great virtues are all related to its external appearance. Firstly the floor-plate depths are graded in relation to the uses they contain (offices need deeper floor plates than hotels and apartments) so that the building tapers elegantly. Moreover this elegance is always present no matter how much of the overall form is hidden by other buildings. Secondly with the perimeter modelled as eight distinct ‘shards’, the scale of the building is fragmented and light reflected in interesting ways – not least by dint of the way in which the angled glass reflects the ever-changing sky and not the static cityscape, lending a sense of lightness few other towers can claim. Thirdly, understanding that there are many days when the London skyline reads only as a depressing grey silhouette, the architects have left a substantial part at the top open, adding further to the lightness even in these conditions, not unlike the Gothic spire of a German cathedral. Any doubts about this lack of resolution are dissipated when one considers the alternative: a re-working of the 1972 Transamerica pyramidal tower in San Francisco.

The assertions of its virtues can be tested by walking along the pavement in front of the Supreme Court in Parliament Square. If one looks through the gap between Big Ben and Portcullis House, a view subject to challenge in a recent Public Inquiry, the Shard appears next to the spires of the Palace of Westminster with the inevitability of an established and historic part of London’s skyline. 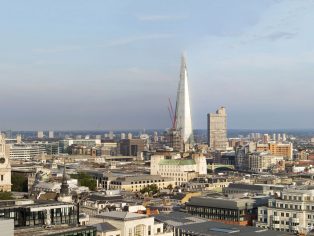