The £44 million Riverside Schools off-site project – the largest ever in the education sector – has started on site in Barking.

The scheme for the London Borough of Barking and Dagenham was awarded to the Portakabin Group and is using a Yorkon off-site solution to deliver an innovative three-school campus.

Now under construction, the 23,000sqm Riverside Schools campus will provide places for 2,645 children from 0-19 years on a six hectare site. The development will integrate provision for nursery, primary, special needs, secondary, and sixth form pupils, and will be operated by the multi-academy trust, Partnership Learning.

The Portakabin Group is the main contractor for this pioneering project. The contract was procured and awarded by the London Borough of Barking and Dagenham via the Council’s local education partnership, Thames Partnership for Learning. It is funded by the Education Funding Agency.

Designed by Surface to Air and constructed using a Yorkon off-site solution for the curriculum areas, the scheme comprises an 1,800-place secondary school, a 630-place primary school, a special educational needs (SEN) school, and a 55-place nursery.

The use of off-site construction will significantly reduce the programme time. The structure is now in production in York at the same time as the major ground works are progressed on site in East London.

The project has been scheduled to complete the primary and SEN facilities at an earlier stage, in time for the start of the 2016/17 academic year to meet the urgent demand for places in the borough. The rest of the campus will be completed late Spring 2017.

The Riverside Schools scheme is being developed in the Barking Riverside regeneration area, which is close to Barking town centre and part of the Thames Gateway development. Early phases of substantial housebuilding have already been completed with further plans for 12,000 new homes increasing the need for education provision. 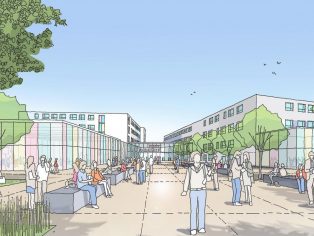