Nine Elms on the South Bank

Nine Elms on the South Bank is the £15 billion opportunity area between Lambeth Bridge and Chelsea Bridge, and is one of the largest regeneration projects in Europe. The area will be transformed from one of the capital’s last remaining industrial districts into a world-class destination right in the heart of London. Underutilised industrial land is making way for new public squares, parks, schools, Tube stations, homes, and businesses, which will drive growth and create jobs and homes. It will become a strikingly modern addition to the cityscape and a new centre for culture on London’s South Bank.

The greatest transformational story at the heart of the world’s greatest city.

This is how we see Nine Elms on the South Bank and how important the area’s regeneration is for the boroughs of Lambeth and Wandsworth, the rest of London and the UK economy as a whole. This is the last piece of the central London jigsaw and will complete the redevelopment of the South Bank. 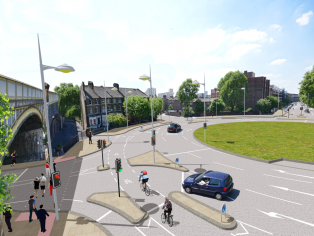