The Hatea River crossing, which is now to be known as Te Matau a Pohe, is a rolling bascule bridge which has recently been launched with the aim of helping to ease congestion within the city of Whangarei, Northland, New Zealand. Now nearing the end of completion the crossing will provide an alternative option for traffic travelling around the city. The bridge is the only operational one of its kind in New Zealand and one of a very few for road traffic in the world.

Eadon, who were first approached about the project in 2010 by Peters and Cheung, have assisted the main contractors, McConnell Dowell and Transfield Services, with the design of operating equipment and mechanical elements. Working alongside McRaes, hydraulic subcontractors, McKays, electrical subcontractors, and also Knight Architects, Eadon staff began design work in May 2011.

Powered by a sophisticated hydraulic system, the bridge comprises of a 265 metre long viaduct with a 25m lifting span to allow yachts to pass and more than 1.5k of approach road. The bridge has a clear height of 7.5 metres above high water at the central span meaning that most vessels are able to pass underneath without the bridge being raised. Technically the hydraulic system is fronted by hydraulic cylinders which have a bore of 320mm, a rod of 280mm diameter, a stroke travel of 8380mm and a weight of 8 tonnes each and are in place to aid the lifting and lowering of the 400 ton bascule span. 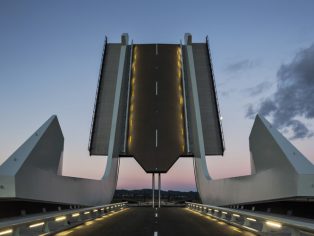