In April 2010, Stanton Williams were announced as the winners of a competition for the design of a new 7000m2 square to the front of King’s Cross Station, as part of the King’s Cross Redevelopment Programme.

The creation of the new King’s Cross Square presents a series of exciting urban challenges. On the one hand the Square forms a focal point at the heart of a district which, following decades of neglect, is currently being injected with a new energy through a range of major urban and transport projects. There is therefore a unique opportunity to transform this neglected site into a new public space.

On the other hand the space also functions as a vital part of the major transport interchange at King’s Cross/St Pancras.Beneath the Square is a complex of London Underground structures which manifest themselves at ground level as entrance stairs, technical equipment and vent shafts. The square itself is also effectively required to act as an arrivals concourse area for King’s Cross station.

The design responds to these multiple challenges by creating a number of distinct spatial zones that are defined by landscaping elements that incorporate the London Underground structures. The new Square provides an orientation and meeting space and two tree shaded sitting areas. The landscaping expresses the space in bands of dark and light granite that visually link the square to Cubitt’s 1852 station facade now fully revealed for the first time. 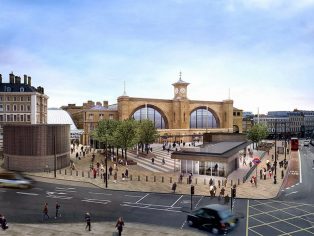