In 2016 LEGO fans of all ages can experience the LEGO® story and the endless possibilities of the LEGO brick in a 12,000 m2 experience centre in Billund, Denmark.

Three generations of the owner family of the LEGO Group today laid the six foundation stones of the LEGO House in Billund, Denmark, the hometown of the LEGO Group. The six stones – precisely dimensioned to represent six classic LEGO® bricks – symbolise the values which are at the heart of all LEGO experiences: Imagination, creativity, fun, learning, caring and quality.

The LEGO House will be a hands-on minds-on experience centre where LEGO fans of all ages can come and experiment with LEGO bricks, share stories with LEGO bricks, express their imagination and creativity through LEGO bricks, and not least be challenged as LEGO builders by meeting other builders from all over the world.

While the interior experiences of the LEGO House are still under development, the building is in itself a tribute to the LEGO brick, as the architectural shapes are based on the LEGO brick.

The building is expected to open for visitors in 2016, and today marked the official start of the construction phase.

When construction of the LEGO House is completed in 2016, a gigantic LEGO brick will sit on top of the 23 meter tall building which will cover an area of 12,000 m2 – including a 2,000 m2 covered square. The LEGO House will feature vast experience areas, a café, a unique LEGO store, the public square as well as the several open roof terraces. It is expected that approximately 250,000 people will visit the LEGO House annually. 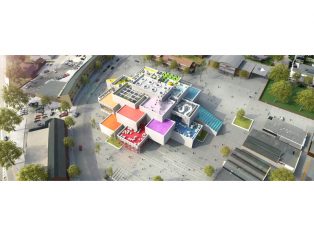