Zip has been leading the way in the filtered boiling and chilled water market since it launched its iconic HydroTap filtered boiling model in 2000. Now, pushing this growing sector even further, Zip has launched the most advanced drinking water appliance on the market to date, the HydroTap G4.

Designed to deliver even greater performance, the latest evolution of the instant boiling and chilled filtered water system has been repackaged into the smallest footprint on the market to make it the perfect choice for commercial and residential applications.

The new HydroTap G4 maintains its stylish and sophisticated finish, however, the all new under sink “command centre” has undergone a great deal of development to give greater efficiency and more superior control.
The WRAS approved G4 cuts standby operating power substantially, when compared to other systems of similar delivery performance. This saving is due to the G4’s improved power saving technology and increases in energy efficiency through enhanced thermal insulation. Zip’s Powerpulse® technology also maintains the boiling water to within 0.2ºC of set temperature to reduce the amount of energy required to heat water from standby.

The G4 offers a sculptured chrome tap with a red “boiling water” lever and blue “chilled water” lever. All G4 taps also feature a “safety” button to eliminate accidental use. The built in safety system is operated by pressing the button and the red boiling lever at the same time to dispense boiling water. A range of colours are available as standard including black and brushed chrome.

The G4 boasts dimensions of 450mm(w)x470mm(d)x335mm(h) making it the most compact under counter, instant boiling and chilled filtered water system on the market.

The G4 is capable of delivering between 160 to 240 cups of instant boiling chilled and filtered water per hour dependant on specification. Fitted with Zip’s 0.2 micron filter, the G4 brings you what is arguably the most advanced water filtration system available anywhere in the world today, providing a healthier drinking experience, which removes all odours and impurities as small as one five-thousandth of a millimetre.

A fully populated Building Information Models (BIM) library for the G4 HydroTap product will be available later this month. 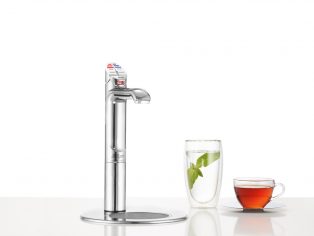