Selected from 30 projects from around the world, the Jockey Club Innovation Tower designed by Zaha Hadid Architects wins a RIBA Award for International Excellence and the Heydar Aliyev Center is shortlisted for the RIBA International Prize.

Built on the site of a Soviet munitions factory, the Heydar Aliyev Center’s fluid architecture embodies an enlightened philosophical framework. Breaking from rigid and often monumental Soviet architecture that is so prevalent in Baku, its open forms promise to open and engage Azeri culture with an act of attraction rather than imposition. The centre’s fluid exterior surfaces rise from its surroundings to define a series of exhibition and performance spaces within, inviting the urban fabric of the city into the heart of building.

Named ‘Design of the Year’ by London’s Design Museum, the centre was cited as “a masterwork of invention and execution” and since opening, has hosted exhibitions by Azeri and international artists such as Andy Warhol, Tony Cragg and Bernard Buffet. The centre has also held performances of opera by Alessandro Safina, jazz by Deedee Bridgewater, experimental music by Kiatro and violin by Itzhak Perlman. On his recent visit to Baku, Pope Francis addressed religious leaders and local residents in the centre’s theatre.

The Jockey Club Innovation Tower (JCIT) is home to the Hong Kong Polytechnic University’s School of Design, and the Jockey Club Design Institute for Social Innovation. The 15 storey, 15,000 sq. m. tower accommodates more than 1,800 students and staff, with facilities for design education and innovation that include: design studios, labs and workshops, exhibition areas, multi-functional classrooms, lecture theatre and communal lounge.

The tower’s interior and exterior courtyards create informal spaces to meet and interact, complementing the large exhibition forums, studios, theatre and recreational facilities. Its design promotes a multidisciplinary environment by connecting the variety of programs within the School of Design, encouraging interaction between the many learning clusters and design disciplines.

The new RIBA International Prize is open to all qualified architects anywhere in the world and reaffirms the visionary purpose of the RIBA as stated in its 1837 charter for ‘the general advancement of Civil Architecture.’

The International Prize will be presented in December 2016 to the architects of the building thought by the judges to be the most significant and inspirational of the year, demonstrating visionary, innovative thinking and excellence of execution, while making a generous contribution to society and to its physical context – be it the public realm, the natural environment or both. 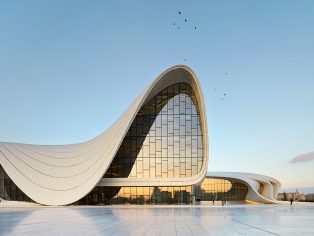 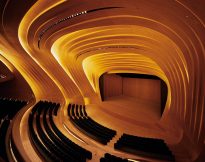