Zaha Hadid Architects has revealed images of a 19-storey tower in Melbourne, Australia, whose parametric design will enable a complex facade to be produced cost-effectively, the firm says.

Located within the “established streetscape” of St Kilda Road in Melbourne, Australia, the Mayfair Tower will enable residents in 158 new residences to take full advantage of its location.

“Taking its cues from the fluidity within Australia’s landscapes and seascapes, the facade’s composition has evolved from a system of simple wave formations that is further developed to generate variables of the same design language.”

“Using algorithms to determine these variables enables the facade to adapt to the wide variety of different apartment layouts and also adapt to the irregular site.”

The computational parametric design used an algorithm to identify shape similar- ities within the facade and minimise the number of different facade panels required. This process “enabled the creation of a sculpted facade that would have otherwise been cost prohibitive.”

The fluidity of the exterior is also carried through into the interiors. Living areas within the apartments have been arranged to maximise the views, with features that echo the sculptural qualities of the facade. 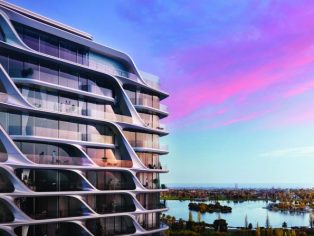