The refurbishment of 32 flats and 6 bungalows at Erneley Close, Longsight, Manchester was part of Eastlands Homes’ £180 million decent homes programme and is the UK’s first large-scale Passive House retrofit. The objective was to achieve the PassivHaus EnerPHit Standard of low carbon energy efficiency.

Ongoing tests and training were carried out under the supervision of a trained Air Tightness Champion. There was also an issue with the size of the glazing in both blocks that needed to be reduced. If left in their original sizes, it may have caused an overheating issue on the south facing elevations.

The Zehnder ComfoAir 160 unit was chosen because of its compact form and performance characteristics, which enabled it to be located on the bathroom wall behind the bath. Green Building Store and Alan Clarke carefully designed and attenuated the system to ensure that the system operates quietly and with maximum efficiency.

“As a developer it was vital we installed the most technically effective MVHR given the constraints of working within an existing building. Each flat now has a great internal air quality with residents amazed at how quiet the MVHR system actually is in performance.” 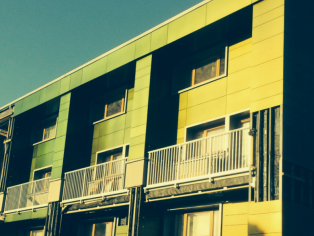