The oyster-shaped profile of Salerno Maritime Terminal is a striking sculptural presence on the Amalfi Coast, made all the more significant because it is the late Dame Zaha Hadid’s swan song. Stephen Cousins reports.

Hugged by a lush green valley and lapped by the calm, sun-spangled waters of the Mediterranean, the Port of Salerno, south west of Naples, is a fitting location for the first building to be completed following the passing of the late Dame Zaha Hadid.

Salerno Maritime Terminal stands on a public quay that reaches out into Salerno’s harbour and exhibits much of the geometric complexity and flamboyance unique to the Iraqi-born British architect’s oeuvre.

The building resembles a giant oyster washed up on the beach, its undulating concrete shell protecting ‘softer’ elements within, including a series of sinuous curving ramps that direct passengers to and from cruise liners and ferries moored alongside.

The roof is effectively an extra facade on the building, visible from many locations in the city and the surrounding hills, covered with an intricate pattern of ceramic tiles, a mix of greys and blues designed to mimic traditional artisan tiles on historic buildings in the area. The surface twinkles in the midday sun, like the iridescent film on an oyster shell, and helps insulate the interior from frequent high temperatures in the summer.

The project was always close to Hadid’s heart, from her initial sketch and design for the competition between 1999 and 2000, through to the later stages of construction. Paola Cattarin, project architect at ZHA, explains:

“Back when we started, the London main office was much smaller and we were pretty much in one open space with Zaha sitting in the middle so she could follow every single step very closely. She visited Salerno when we won the competition and was always very closely involved.”

The new terminal will greatly improve accessibility for visitors to the region’s renowned cultural attractions, coastline and countryside, increasing the capacity for ferry and cruise ship arrivals by around 500,000 passengers a year and creating up to 2,000 new jobs in the city’s hospitality, services and retail sectors. The location is in easy reach of the nearby destinations of Capri, Paestum and Pompeii.

The project continues Hadid’s fascination with the sculptural capabilities of concrete, explored in projects such as Innsbruck’s Bergisel Ski Jump (2002), Cincinnati’s Rosenthal Center for Contemporary Art (2003) and, more recently, the Aquatics Centre at the London 2012 Olympics.

The structure is effectively divided into two ‘shells’, upper and lower, constructed in fair-faced concrete, a technology developed in the 1960s that is still very common in Italy.

The wavy roof creates a self-supporting structural dome effect, making it possible to reduce the thickness of the concrete roof slab, as well as the number of points of support below, to free up space inside the terminal.

Concrete is very energy intensive to produce, but its environmental impact was mitigated by sourcing materials locally. The fact it functions as both structure and final finish for the walls eliminated the need to add an extra cladding layer.

Other sustainable features in the building include a natural ventilation system, designed to exploit the facility’s exposed windy location in the centre of the harbour. The external glass facades are relatively small in size and sheltered from the sun thanks to a combination of roof cantilevers and simple louvres that reduce solar gain.

The terminal is laid out over two levels that accommodate three primary interlocking components: a terminal for international ferries and cruise ships; a terminal for the local and regional ferries; and administration offices for national border controls and shipping lines.

The concrete quayside gently rises in a series of stepped ripples as passengers approach the terminal from the city.

The approach morphs into a sloping path of ramps within the building that guide passengers up through passport, baggage and security areas to the main embarking level for ships and ferries.

Local and regional ferry commuters move through the terminal quickly, arriving on ground level and ascending on ramps to reach the upper level and vessel entrance. Passengers travelling on international voyages are guided through check-in, passport, security and customs controls to ships.

“A maritime terminal operates a lot like an airport, with mostly continuous trajectories and people moving from one side of the building to the other to reach the ships. We wanted the architecture to provide the main orientation, using the softer effect of ramps inside the oyster structure to guide passengers.”

Many interior spaces flow into each other and are organised around focal points, such as the restaurant and the waiting lounge.

According to Cattarin, designing maritime terminals forces architects to take into account some extreme restraints and requirements as a result of increasing security controls and the growing number and size of cruise vessels that have boosted passenger volumes.

“When designing a maritime terminal, the challenge is to conceal these efforts and integrate functionality with the structure and the overall architectural intent,” says Cattarin. “A number of revisions related to increasing security levels and controls had to be integrated.”

Transparent glass elements were introduced to provide seclusion and separation required by law and simultaneously maintain levels of transparency and visibility throughout the length of the building.

The fact the terminal is overlooked by the surrounding hills provided an ideal opportunity for the roof design, explains Cattarin:

“The terminal has an incredible position, visible from many locations in the city, making it a key focal point. We realised the roof would effectively function as an extra facade for the building and spent a great deal of time investigating its appearance in terms of its shape, materials and cladding.”

The pattern of grey and blue tiles are laid out to appear more intense in colour over steeper areas of the roof, and in deep depressions, and lighter where the roof is more flat. The product is a locally-produced industrial ceramic designed to mimic traditional artisan tiles installed on the roofs of major historic buildings in the area, such as churches and public buildings. It also functions as a very resilient and highly insulative layer, protecting passengers from the extreme heat conditions of the Med.

Salerno Maritime Terminal is an integral element of an urban plan for the city, conceived in 1993 to bring about social,  economic and environmental regeneration. The project was begun under mayor Vincenzo De Luca, now governor of the Campania Region, and continued under the current mayor, Vincenzo Napoli.

The project wasn’t all plain sailing, ZHA won the international competition to design the terminal back in 2000, and took responsibility for site supervision and contract administration, but practical and economic challenges meant the building took over 15 years to reach completion.

“The main contractor started work in 2005, but was unable to complete so we had to go to a second tender. Being a public work, the process was quite complex and meant putting the project on hold for at least two years. The subsequent sporadic availability of funding meant we went through a process of stops and starts before achieving completion.”

Fortunately for ZHA, the client – the Town Council of Salerno – was so keen on Hadid’s ideas that no significant compromises to the architectural design were required.

As a result, the finished building is unmistakably Zaha and an instantly recognisable destination on the Amalfi Coast. It is also a work that the architect, though sadly departed, would be proud of, says Cattarin: “Although Zaha could not attend the opening, she was with us every step of the way through the long history of construction. I hope from the bottom of my heart that she would be happy with the finished building, but as we all know, she was notoriously difficult to please and would have probably found lots of faults.

“That was the thing with Zaha, she was always pushing us to be the very best we could be.” 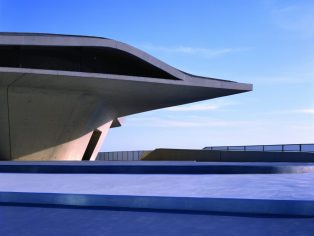 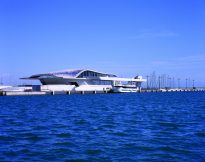 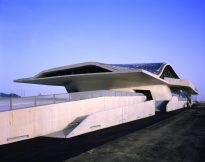 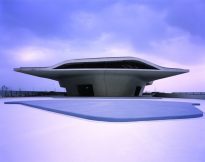 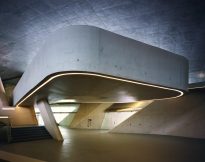 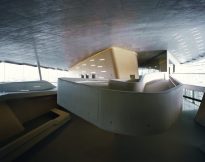 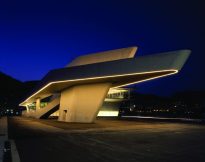