YIT signed the purchase agreement for the land areas related to the Central Pasila Tripla project with the City of Helsinki and Senate Properties.

The concept of YIT’s competition entry has been created by the Dutch architects Office for Metropolitan Architecture (O.M.A.). The Finnish architect and main designer of the project is Arkkitehdit Soini & Horto Oy.

In addition to the plots, YIT buys the old Pasila railway station from Senate Properties.

Majority of the plots are purchased by the project company established for the Tripla shopping mall and the parking facility. YIT’s share of ownership in the project company will be 35 per cent in line with the Letter of Intent signed in December 2015.

”I am especially pleased with the very good co-operation with the City of Helsinki and Senate Properties, which has been key in ensuring the seamless progress in the project. The now signed purchase agreement is yet another concrete step forward in the project”, says Kari Kauniskangas, YIT’s President and CEO.

During the coming years, Pasila will become a second city centre for Helsinki and an even more important transportation hub that is expected to double its resident and job numbers by 2040.

The development of the area starts with YIT’s Tripla project, which comprises a shopping mall and a parking facility as well as offices, apartments and a hotel. 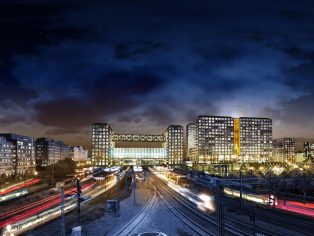