Glenn Howells Architects and the Ballymore Group have received a resolution to grant planning permission for two new residential towers of 50 and 55 storeys in the London Borough of Tower Hamlets, clearing the way for development of a prime waterside site. Arrowhead Quay lies on the southern edge of South Dock, immediately opposite Canary Wharf. The proposal is a residential-led, mixed-use project, which also includes retail, leisure and restaurant/café facilities, and a new landscaped public plaza to the west.

The two slim towers are set apart to maximise views from all apartments towards Canary Wharf and the City, as well as providing an abundance of sunlight to the dockside. A key feature of both buildings is the continuous, six-foot wide wraparound balcony at every floor level – these enormous private amenity spaces are more akin to gardens than balconies in the usual sense. A two-storey sky garden on top of the taller tower will serve as a residents’ lounge, offering incredible views to the city skyline and Thames Estuary to the east. Almost half of the site is to be provided as high quality, publicly accessible landscape, including play space and greatly improved pedestrian links to the historic dockside walk and South Quay footbridge.

Arrowhead Quay comprises 756 apartments, of which 624 will be offered to private buyers, 42 on a shared ownership basis, and 90 as affordable rental properties. The towers step down in height away from the central Canary Wharf commercial area, reflecting a gradual fall in building height and Arrowhead Quay’s location in the ‘foothills’ of Canary Wharf.

The project responds to key local planning policy, including the Millennium Quarter Masterplan and the emerging South Quay Masterplan, due to be adopted in 2015. Arrowhead Quay is recognised as establishing a positive first step in realising the Borough’s ambitions for the wider South Quay area. 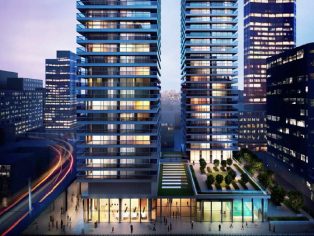