Working from home creatively: advice from an architect

Like much of the UK, building products manufacturer, Forterra, has many of its colleagues presently working from home. As Britain enters its fifth week of lockdown, the question of how to be creative, as well as productive, outside your normal routine is now a hot topic.

So, Forterra has teamed up with architect Billy Mavropoulos from Bureau de Change to share some advice for others in creative industries to tackle that very issue.

“Typically, creativity in our office is a team effort. Day to day , we’ll be bouncing ideas around, drawing and looking for references… when you’re working from home, you can’t get instantaneous feedback.”

So how do Billy and the team make their current situation work for them? These are his top tips:

Billy and the team have a group Zoom call first thing in a morning and in the afternoon every day to ensure that the whole team is up to speed with everyone else’s agenda.

“We’re lucky, as we’re only a team of 10 which makes it easier. Interestingly, in the office everyone might not be privy to every conversation and project – people are doing their own thing. Now we’re all sharing views and ideas I actually think it’s improved the way we work… 10 views are better than one!”

2. The team keep their calls creative and ideas-based.

“Of course, there’s housekeeping to do too. But a lot of it is very creative. I’ve noticed that people don’t have ‘off days’ at the minute – everyone is very much looking forward to catching up with their colleagues.”

“People are keen to talk, get involved and express their opinions, even if it’s not their project or it’s something they’ll never work on themselves. They’re just interested and want to talk about it. That’s another big positive about our new normal.”

3. Billy advises that creatives should take a flexible approach to their new normal.

“The lack of physicality has been difficult. Printing things out, sketching with a pen, or making a physical model are usually key parts of the job, and they’re things that can’t happen in the same way at the moment.

“Other things have improved enough to make up for it, though. People have more time to do their admin in their own way now, which means there’s more time and energy for creative output. People do just adjust to whatever situation they’re in – we’re proof of that.”

“There has been a lot of talk about how to be productive in the last few weeks but being creative presents just as much of a challenge. You would think it would be difficult to adapt to a whole new way of working, but people on the whole are really resilient and adaptable.

“Lockdown is giving creative teams the opportunity to look at the big picture – it’s an exciting time to generate great ideas for post-pandemic projects, so get in touch with our Specification and Commercial team who are on still on hand to help; they can support with ideas, product advice and even CPDs online.”

With an ambitious facade made up of over 5,000 Cradley bespoke bricks, the striking Interlock building in Fitzrovia, London is an outstanding example of what is possible when an architect and a clay brick manufacturer work collaboratively. The building won numerous awards throughout 2019 and continues to do so into 2020.

To contact Bureau de Change or see their body of work, visit www.b-de-c.com 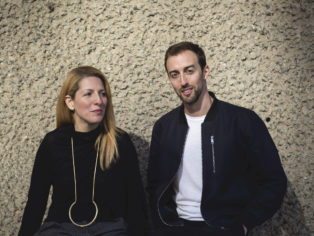