Construction is under way on the latest state-of-the-art building at the heart of one of region’s key regeneration sites.

The 100-hectare site, one of the North East’s largest and most exciting regeneration schemes, has already attracted more than £150 million in investment through the development of the striking Middlesbrough College campus, new office space, homes, leisure facilities, bars and restaurants.

Middlehaven represents a fantastic new urban streetscape, situated close to Middlesbrough town centre and with excellent links to the road and rail network.

The site is set to attract a further £58 million in investment over the next two years, including the refurbishment of the Transporter Bridge, (£2.6m Heritage Lottery Fund grant), a further expansion to Middlesbrough College’s facilities (£20m), a new Sainsbury’s Superstore (£35m) and a fantastic new Urban Park.

The redevelopment of Middlehaven is a long-term project, which is being delivered by Middlesbrough Council and the Homes and Communities Agency (HCA). Part of the ethos of Middlehaven is to support business ventures of the future via the DigitalCity initiative, a partnership between Teesside University and Middlesbrough Council designed to support businesses in the digital and creative sectors.

This initiative has so far created 537 new additional jobs, 264 new businesses, supported a further 515 businesses and attracted 12 firms to the Tees Valley (May 2014 figures).

Boho Five is a £4m project being built on land owned by the Homes and Communities Agency (HCA), jointly funded approximately 50% each by the HCA and the European Regional Development Fund Competitive Programme 2007-13 (ERDF) and delivered by Middlesbrough Council.

A highly quality building designed specifically for the digital and creative sectors, Boho Five will sit close to the existing buildings within the town’s cultural and creative Boho Zone.

Boho Five is on the corner of Bridge Street East and Windward Way, building on the success of the nearby Boho One, opened in 2009, a nearby business complex part funded by ERDF, which hosts 16 businesses with 180 jobs. These new business units will support the development of small and medium sized enterprises (SMEs).

The start of construction work on Boho Five was marked with an official launch for key partners hosted by Middlesbrough Mayor Ray Mallon.

At over 24,000 sq. ft. the new building is designed for the specific needs of the digital and creative sectors providing:

Boho Five is developed in partnership by the Homes and Communities Agency and Middlesbrough Council, who will operate the building in close partnership with DCB. Boho Five will be fully integrated with the management arrangements for Boho One, to provide a seamless offer to cluster companies and potential entrepreneurs, supported directly by the business development services provided by DCB.

“The start of on Boho Five is another step forward for Middlehaven by ensuring that local creative businesses have the right environment to ensure their success and by helping deliver DigitalCity Business for the Council.”

“The success of the Boho development is another example of the recent good news in Middlehaven with the new college expansion due to open this autumn followed shortly afterwards by the Urban Park.”

Xsite has been involved with the Boho Zone area from its inception in 2005 designing Boho One, Boho Two (Bohouse) and undertaking refurbishment of Gibson House (Boho Four) to create digital office space. Esh Build, part of the Esh Group, has been appointed to construct the £3.2 million new building. This firm is highly experienced with brown field sites and is currently also constructing the STEM building for Middlesbrough College nearby. The project is managed by Parsons Brinckerhoff on behalf of Middlesbrough Council.

“We are very pleased to see work starting on this next phase of the Boho Zone which forms a key strand of our regeneration strategy.”

“Boho Five will be fully integrated with the management arrangements for Boho One, to provide a seamless offer to cluster companies and potential entrepreneurs, supported directly by DigitalCity Business.”

“This is a thriving sector and we are confident of Boho Five’s ability to further transform Middlesbrough’s digital economy.” 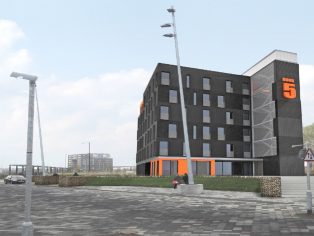