At the same time, Matt Ford, civil engineer, has been promoted to director and now runs the Woods Hardwick Birmingham office.

Simon is tasked with establishing the Structures Division, offering existing clients structural engineering expertise as well as bringing new projects on board. Since Simon joined in May, Woods Hardwick has secured 17 commissions with more in the pipeline. A chartered structural engineer he has 20 years’ experience and has been involved in many award winning projects including Magdalen College (2017, RIBA National award), Newport Street Gallery (2016, Stirling Award) and University of Greenwich (shortlisted for 2015 Stirling Award). His work on Somerset House won the Structural Heritage award from the Institute of Structural Engineering.

Over the course of his career, he has worked on projects with a value of over £570m. Simon has significant experience with conserving and altering listed and historic buildings including, Magdalen College Oxford, Corpus Christi College Cambridge, The Geffrye Museum and The Royal Automobile Club. He has been involved in over 15 large arts and leisure projects, including Somerset House, Newport Street Gallery and the Black Cultural Archive. He is also experienced with large basements and has worked on 14 significant basements including St Martins’ in the Fields and the University of Greenwich’s School of Architecture, as well as several large scale private homes.

Nicole Portieri, RIBA, joins Woods Hardwick as director to head up the Commercial Architecture Division and brings over 20 years’ experience to the practice. Joining from Space4Architecture in New York, Nicole acted as lead architect for four Dolce & Gabbana stores. She also worked on a number of luxury private residential projects, both renovation and new build, as well as the Elmhurst Community Library in Queens, New York, winner of the 2017 AIA BQDA Design of the Year Award. Nicole has extensive experience in both large scale new project design and significant renovations, and is familiar with all phases of the architectural process from planning, design, to construction and development.

Peter Prescott, RIBA, associate director, is heading up the Residential Design & Delivery Team. Joining from Pollard Thomas Edwards, he brings over 12 years’ architectural experience. He has been involved in large scale mixed-use schemes including Chobham Farm Zone 4 next to the Olympic Park, which was a 470 apartment development; City Park West, a mixed-use project in Chelmsford’s city centre combining leisure, retail, commercial and 500 apartments; and Lymington Fields, one of the first London Mayor’s initiative to develop former public land into residential development, in this instance 400 homes. At Woods Hardwick, Peter has a two-fold role delivering estate housing schemes from planning to construction whilst being involved from the outset in the larger scale mixed use urban schemes.

Matt Ford, civil engineer has just been promoted to director, after a year at Woods Hardwick as associate director. Matt heads up the Birmingham office, managing a team of engineers and technicians, focussed on infrastructure design.

Commenting on the appointments Calum Wilson, one of the established board Directors, says “Woods Hardwick is thirty years old this year. It seems the right time to reflect on our position and where we are heading as a practice. Engineering has always been a key part of our offer but the lack of structures experience was frequently commented on by clients. Bringing Simon, with his wealth of experience, on board ensures we’re now able to offer a fully integrated service from planning and initial site surveys, through to detailed design and construction.

We’ve made the decision to significantly invest in our future and on increasing our design focus. We were getting more and more design led work and so we needed to be able to service that demand. Nicole and Peter are the perfect pair to lead our commercial and residential teams”.

Matt has ensured the Birmingham office has been a success and their growing workload means that they are now recruiting more staff”.

He continues “Our ethos has always been about combining imaginative design with commercial understanding and the new team will continue this and push new boundaries”. 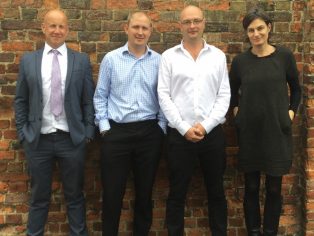