Wood burning stoves – a heat source of the future

Wood burning stoves are increasingly the heating system of choice for many homeowners in both new and existing houses. Stoves have traditionally been seen as a lifestyle choice, but homeowners now also see them as environmentally friendly and economical.

Wood is one of the most environmentally friendly fuels available. It is a renewable energy and virtually carbon neutral. The natural cycle of planting and harvesting trees has created a sustainable process that will provide carbon neutral fuel into the future. CO= is taken out of the atmosphere by growing trees at the same time as it is released by the combustion of the previous harvest. To reflect this closed loop CO= cycle, the carbon factor for wood logs in SAP is only 0.008kg of carbon per kWh compared with 0.198kg for gas, 0.274kg for oil and 0.517kg for electricity.

Interestingly the amount of carbon released by burning a log is less than the carbon that would be released if it were left to decompose on the forest floor. What’s more Defra has exempted clean burning stoves for use in smoke control areas. Most urban areas in the UK are in smoke control areas. This means that a Defra exempt stove can be used in an urban house and not affect air quality.

A stove with an integral boiler can be used to entirely run the central heating and hot water or used in combination with another primary heating system. According to SAP, linking a wood burning stove with a gas condensing boiler, an oil burner or a heat pump to share the heating of the house will reduce the carbon output by 11-12 per cent when the stove is responsible for heating 20 per cent of the house and 23-24 per cent when the stove heats 40 per cent of the house.

Using an efficient wood burning stove on its own for water and space heating can reduce the house’s carbon footprint by more than 80 per cent compared with gas, oil, LPG or heat pumps.

To enjoy the maximum environmental benefits of burning wood it is important to use wood that has been properly dried. Kiln dried and naturally seasoned (pre-dried) wood are becoming readily available. Freshly cut wood should either be left to dry for at least one and preferably two seasons before being used or alternatively the wood purchased should be kiln dried or seasoned. This is because freshly harvested wood contains a naturally high amount of water, between 65-90 per cent depending on the species. Burning water is not a good idea. Kiln dried and seasoned wood have an average moisture content of below 25 per cent and consequently produce 4.5 kW/h per kg, compared to wet/freshly-cut wood and semi-dried logs, which produce 1.0 kW/h per kg and 3.0 kW/h per kg respectively.

As you can see there are many good reasons for choosing wood burning stoves as the heat source of the future. Renewable heat avoids the emissions of heat energy from fossil fuels. When burned, high-quality wood emits less CO= than it does with natural decay, and used with a correctly installed stove, approved for burning in smoke controlled areas, it provides both economic and environmental advantages for all homeowners. 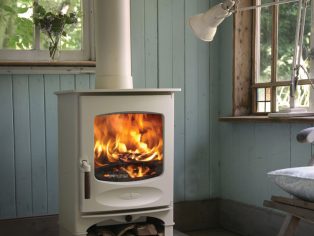 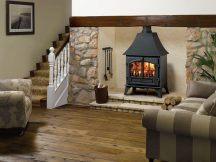