A number of our projects have been recognised by a wide range of awards recognising their contribution to architecture, engineering and their communities.

The William Morris Gallery in Walthamstow, London, has been named Museum of the Year. Art Fund holds the Museum of the Year awards annually to celebrate museums and galleries across the UK. Described by judges as ‘a magnificently restored building’, this Grade II* Georgian house was the former home of William Morris. Ramboll undertook the conservation and extension works using traditional materials and techniques whilst integrating modern services between 2011 and 2012.

The historic house was fully refurbished, with new collection displays being created on the ground and first floors. The top floor was turned into a learning and research centre, with staff offices being relocated to the refurbished basement. A new extension was built on the site of the old east wing, housing a tea room, a special exhibition gallery and a collection store. Pringle Richards Sharratt was the architect and exhibition designer.

On the south coast, two of our landmark projects have been recognised by the Royal Institution of Chartered Surveyors (RICS). The institution has named Vestas Blade Technology Centre on the Isle of Wight, and Twin Sails Bridge in Poole regional infrastructure projects of the year for the South East and South West respectively. The RICS Awards recognise the most exciting achievements in property, construction and the environment.

The Vestas Blade Technology Centre is designed to provide an environment in which their massive turbines may be built and tested to destruction. We led this project, and provided multidisciplinary services that covered the whole spectrum of design and engineering requirements. Twin Sails is a steel bascule road bridge with distinctive silhouette when open. We provided a multidisciplinary services for its realisation, including an environmental impact study, bridge detailed design, and the design of approach roads and a number of associated marine works.

The Constructing Excellence North West Awards rewarded Chester Town Hall’s Refurbishment with the Regional Best Project Award. The project saw the refurbishment of a number of spaces with Ramboll carrying out a survey and report on the building structure and services as well as the engineering design.

Finally, the Stowe Gardens Visitor Centre and Waingels College, two projects that showcase our innovative work with wood and timber, won RIBA National Awards. Since they began in 1966, the RIBA Awards reward great architecture across the UK, with RIBA National Award winners automatically eligible for the prestigious Stirling Prize for architecture. 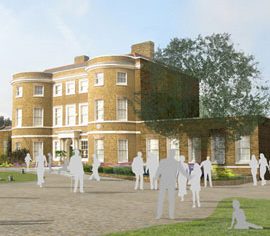