Jeremy Melvin, Curator of World Architecture Festival (WAF), heralded the drawing as “a superbly conceived and executed perspectival view looking down through the building from roof level, praised for its technical skill and the sensitivity with which it depicted the spaces found in such institutions as settings for multi-generation social interaction”. It was produced as part of Ng’s final diploma project at The Bartlett School of Architecture, University College London.

As winner of the category for Hybrid images, Ng’s drawing was selected for the top prize over the winners of the other two categories: Christopher Wijatno’s Deepwater Purgatory in the Digital category; Dimitrios Grozopoulis’ Scenarios for a Post-Crisis Landscape from the Hand-drawn category.

Wijatno depicted a prison moored like an oil rig in deep water, which judges felt evoked Piranesi and Dante. Grozopoulis’ drawing was commended by judges as having a haunting quality beyond that of most images of post-industrial landscapes, portrayed with an extraordinary control of line.

“Drawing has always been a passion of mine, I imagine it is for most architects. So few drawings are realised as actual buildings, but this is a chance to celebrate the drawing as its own creation, its own piece of art. We hope that this shortlist will provide an exciting snapshot of creative thinking and excellence in drawing from around the world.”

“In the end three drawings emerged which we felt demonstrated a perfect unity of subject, technique and media – and these were our winners. The competition has shown that the art of architectural drawing is well and truly alive”.

“A great drawing is the first step from beauty to immortality. The importance of drawing can’t be exaggerated because it evidences aesthetic and conceptual perception at the most fundamental level.”

The shortlist extends to 38 accomplished entries from architects, designers and students hailing from 15 different countries around the globe. Sixty percent of the shortlisted entries were submitted by entrants aged 30 and under.

These shortlisted entries will be displayed at the Architecture Drawing Prize stand at the World Architecture Festival which takes place in Berlin from 15-17 November 2018. All winning and commended entrants have been awarded a delegate pass to attend the event. There will be presentations for the category winners and exhibits of the shortlisted and winning drawings on the stand. The overall winner, Jerome Xin Hao Ng, will receive an award at the prestigious Gala Dinner, which closes the Festival on the evening of November 17th.

The winning and shortlisted entries will then be exhibited at Sir John Soane’s Museum in London from 21 February – 14 April 2018.

The Architecture Drawing prize was created in recognition of the continuing importance of hand drawing, whilst also embracing the creative use of digitally produced renderings. Submissions have been evaluated on the basis of their technical skill, originality in approach and ability to convey an architectural idea, whether for a conceptual or actual building project. 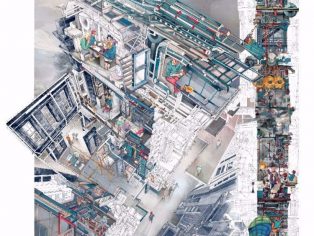 Scenarios for a Post-Crisis Landscape by Dimitrios Grozopoulis, winner of the Hand-drawn category.