The Bush Theatre reopens this week following the biggest capital project in the theatre’s history. The £4.3million, year-long revitalisation of the venue by award-winning architects Haworth Tompkins has turned an old library built at the turn of the 20th Century into a fully accessible, modernised cultural building.

Haworth Tompkins’ latest project at The Bush Theatre concludes the practice’s gradual transformation of the former public library building for performance use. The scope of their most recent work included a new accessible entrance, establishing a more distinct public identity for the theatre, connecting the reconfigured interior spaces more directly to the street and garden terrace, and realising Artistic Director Madani Younis’s vision of a porous building and a theatre that reflects and invites in the world around it.

The internal additions comprise enlarged foyer spaces, an attic rehearsal room, a new workshop, two dressing rooms, and a new performance studio, which will allow the Bush to work with a further 200 artists each year and allow over 50% increase in produced, co-produced and commissioned productions. The existing offices on the first floor have also been reconfigured and upgraded to rationalise the existing space.

The interior fit out is a collaboration between Haworth Tompkins, scenic designer Chiara Stephenson and the Bush Theatre in-house production team, continuing a pattern of shared authorship and informal intervention established during the original phase of work.

“Working with the Bush Theatre team over the past few years to make a welcoming, open-hearted theatre has been a real pleasure. We’re looking forward to the building coming back to life as audiences, artists and staff make themselves at home again.”

“Following this landmark capital project, we couldn’t be more excited to re-open our building to the world. We’re looking forward to welcoming audiences old and new to a space that has been the centre of its community for over 100 years. With the expansion and reconfiguration of our home, we are proud to embrace even more new voices who will breathe life into this remarkable building. They will define it for the next generation.” 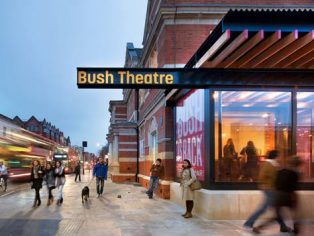