Following the £9m regeneration of Lincoln’s Waterside, which was led by local architecture, sports and leisure firm LK2, the shopping centre has been shortlisted for a prestigious national BCSC Gold award.

The awards, which recognise excellence within retail property, are held annually and this year the winners will be announced at an award ceremony held at the Grosvenor House Hotel in London on the 3 December.

The Waterside has been shortlisted within the refurbishment over £5m category which is aimed at developers and asset managers looking to showcase examples of investment in an existing retail destination where they seek to highlight extension, refurbishment and general repositioning of a shopping centre.

The refurbishment of the Waterside shopping centre was completed earlier this year and has already achieved accolade within the industry and from the people of Lincoln for considerably improving the retail offering in the city. The Waterside provides the impetus for the regeneration of Lincoln’s shopping offer.

Paul Starbuck, a director at LK2 who led the project, said:

“The Waterside no longer provided a standard of retail which was attractive to tenants and had an out of date ‘boutique’ layout. Because of this the centre had an increasing number of vacant units which led to a continued lack of footfall and decline.

“This has been a team effort between LK2 and Capital and Regional who have project managed the process. It was a challenging scheme in terms of cost and delivery but the outcome is stunning and the BCSC Gold shortlisting is reflective of the success of the scheme.”

LK2’s proposal attracted H&M and Next as new destination stores both with impressive two-storey frontages. As well as the two fashion giants, the refurbishment of the Waterside included new cafes and kiosks, public toilets and improved frontages to the High Street and riverside.

“I’m thrilled the Waterside has been shortlisted for this accolade which recognises the innovative refurbishment and added value to the centre.

“The Waterside had experienced challenges for many years but with LK2s regeneration proposal the centre was destined to return to being Lincoln’s premier retail destination.

“The centre has once again become the retail heart of Lincoln and the shortlisting for the BCSC Gold award recognises all those involved.” 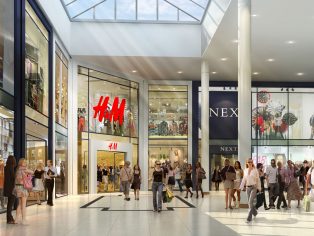