Conway Hall is a Grade II Listed building and part of the University of Notre Dame halls of residence in central London. The 1920’s building was originally a hospital for Children and Women and occupies a prominent location opposite Waterloo Station and the IMAX cinema.

Waind Gohil + Potter were appointed to refurbish and enhance the layout of the student accommodation along with repairing the ailing external facades.

The building had fallen into disrepair until the UND (The University of Notre Dame) took possession with a view to upgrade the building for visiting undergraduates. The UND are one of the United States top-tier learning establishments who own high profile, often historically significant, premises across the globe. It was imperative that the building be brought back to standard as efficiently and with the least disruption to University operations.

WG+P refurbished 42 student apartments ensuring all works were undertaken in a carefully phased and controlled manner whilst the remainder of the building was kept in use. This phasing of the works caused the least disruption to the running of the university and alleviated the need to completely re-house students.

One of the more challenging elements was the repair and replacement of sections of the original listed façades. Whilst they may have looked acceptable when viewed from street, they were suffering from Regents Street disease, which is a common defect of buildings from this era whose ornate facades are constructed of terracotta cladding supported by an iron sub-frame: over the years the iron sub-frame rusts and expands causing the terracotta to crack and sometimes fall off.

Sourcing a convincing replacement glazed terracotta tile for the main entrance was a lengthy and intricate process involving test samples from companies in the UK, Italy and US all looking to replicate the unusual patina that was originally created by using a lead additive in the glaze process, a material nowadays off-limits due to environmental reasons.

As with the approach to all listed buildings the first preference is to retain and repair the historic fabric and so many of the existing tiles were removed for refitting once the ironwork behind was repaired, meaning that the new terracotta units would need to be a very convincing match to those which had been part of the façade for many years. Eventually, after many dozens of samples and attempts, a glaze process was agreed and the intricate new clay mouldings fired and finished for fitting. Whilst it is inevitable that differences between old and new are visible up close, the overall effect is very convincing, indeed it is hard to notice in passing that half the entrance façade is new. The reinstated units are in every way a match to those they replaced , each one being hand glazed giving them a unique variation and texture, just as the originals.

“The process of replicating such a unique aesthetic whilst being historically faithful to the material process and form of construction was a challenge requiring a lot of perseverance from the main contractors and historic façade specialists PAYE but also a lot of understanding and patience from the client. We are delighted with the result and it was well worth the effort; it’s rare in modern construction that such an artisan solution is the only viable means to achieve the end result.” 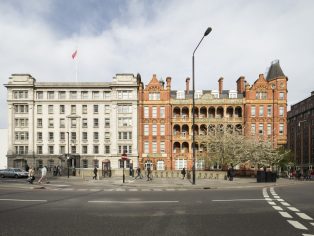