For the month of November, a team of male members of staff at Vent-Axia are becoming ‘Mo Bros’ as they pledge to support the global charity initiative Movember, which is committed to ‘changing the face of men’s health’, one moustache at a time! Mo Bros started November with clean-shaven faces and are now growing and grooming their moustaches to become ‘walking, talking billboards’ that raise awareness of the crisis in men’s health.

The “Vent-Axia Gentleman’s Club” Movember team is led by Sales Support Manager, Robert Struzik-Forrester who is passionate about the cause and for whom it resonates for a very personal reason. Robert first took part in Movember in 2013 to raise funds for the charity initiative but then the following June he was diagnosed with prostate cancer. He had an operation in July 2014 followed by 33 radiotherapy sessions over six weeks during November and December 2014. He received the all clear on 31 December 2014.

“I’m quite passionate about people being checked for prostate cancer. I went to the doctors for a blood test for high blood pressure and the nurse suggested I have my PSA levels tested for prostate cancer too. When the tests came back my blood pressure was fine but my PSA was very high. When I found out I had prostate cancer it was a shock as I was only 48 and had two young children. I found talking to other people about it helped. I would encourage people not to ignore the symptoms and to be checked out, especially with prostate cancer. I know people can find it embarrassing talking about it but being checked early is really important. I was lucky to have an early diagnosis and I have now been cancer free for two years.”

The team hopes to raise as much money as possible as well as growing impressive moustaches! If you’d like to donate to the team, visit https://uk.movember.com/donate/payment/team_id/2234418.

Vent-Axia is getting behind the team’s efforts too. As part of its ‘80 for 80’ initiative, the company is donating £80 to the team’s fundraising total. This initiative is part of Vent-Axia’s 80th anniversary celebrations and involves Vent-Axia donating £80 to a member of staff’s chosen cause to help them meet their charity fundraising target. Plus Vent-Axia is also offering employees volunteering opportunities to support the local community and charities. 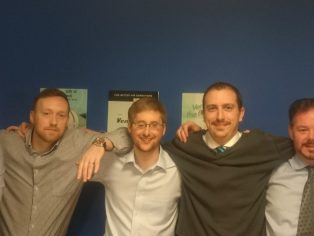