Vent-Axia supports charities throughout 2017 and 2018

Leading ventilation company Vent-Axia, along with many of its staff, have continued to support a range of national and local charities throughout 2017 and is continuing to show this support in 2018.

Ranging from bake sales and raffles through to donating equipment to worthy causes, the West-Sussex based manufacturer has lent its support to both well-known charities, such as Great Ormond Street Children’s Hospital and Macmillan Cancer Support, and smaller groups such as a regional group of professional artists with learning disabilities.

“Vent-Axia is delighted to support a variety of charities who all do very important work and make a real difference to people’s lives. We are also happy to be able to support our staff in their own fundraising efforts. They’ve enjoyed putting on a range of activities at our offices to raise funds for worthy causes.”

A number of work place events have raised over £1000 for charity. Local Crawley charity, St. Catherine’s Hospice, has benefitted from a raffle last year that raised £208 and a recent bake sale that raised a further £215. Meanwhile, a Cupcake Day for the Alzheimer’s Society raised £110 for the charity. A Christmas Jumper Day collected £216 for Save the Children and another bake sale raised over £300 for Surrey-based Story FMR (Funding Melanoma Research), a new charitable organisation that aims to raise awareness of skin cancer including its risks, prevention and treatment, as well as supporting research into skin cancers.

Support from Vent-Axia staff for colleagues undertaking personal challenges has proven a fundraising success too with Paul Davis, Vent-Axia’s Northern Regional Sales Director – New Build Residential, smashing his target and raising over £1,400 for Alzheimer’s Research UK by running the Edinburgh Marathon in May 2018.

Plus 2017 also saw Vent-Axia once again helping fund the Christmas Children’s Disco Dancing Competition in aid of Great Ormond Street Children’s Hospital. The annual event sees able bodied schoolchildren disco dancing for a day to fundraise for equipment, research and the rebuilding of the hospital, to help other children less fortunate than themselves.

However, Vent-Axia has not only been involved in charity fundraising the company has also donated equipment to worthy causes. Having already appeared in the cult classic, Aliens, the T-series fan is now a film star once more. Vent-Axia donated a T-Series fan to Lucy Skuce, a Vent-Axia fan and a member of Shadowlights, a group of professional artists with learning disabilities in Oxfordshire supported by Film Oxford. The fan featured in her new context film and her large installation project “Blue Sash Window”, both of which will be exhibited at Modern Art Oxford in the autumn.

Meanwhile, little hedgehogs have also benefitted from Vent-Axia equipment this year and will be keeping warm and snug thanks to a Vent-Axia convector heater which was donated to hedgehog rescue centre, 4 the Love of Hogs, as part of Vent-Axia’s Freebie Friday competition.

Vent-Axia continues to support a range of charities and good causes in 2018 and this includes supporting grass roots football by sponsoring a scheme run by the Phil Pledger Academy which offers access to football coaching to children who might not be able to afford to pay to take part in a football training academy. The Academy, based in Hertfordshire, offers an elite training programme aimed at 5-12 year olds run by FA trained coaches. Through the sponsorship children will be able to benefit from discounted training and a free football kit and football.

Headquartered in Crawley, West Sussex and with more than 80 years as an influential industry leader, Vent-Axia continues to set the standard in ventilation. Each year the company supplies air management solutions for over half a million installations across the residential, commercial and industrial sectors in the UK and around the World. 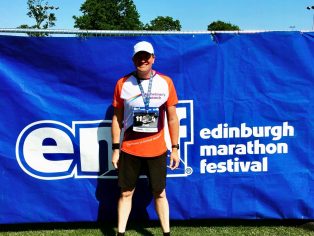 Paul Davis from Vent-Axia at the Edinburgh Marathon