Vent-Axia, a leader in low carbon ventilation, has supplied its Lo-Carbon T-Series fan as part of a new office fit-out for a renowned green building charity requiring improved ventilation. The UK Green Building Council (UK-GBC) has refurbished its London headquarters, with the aim of challenging industry thinking as to what is achievable in a small scale fit out.

The Lo-Carbon T-Series has been installed in windows and a partition wall and was selected as UK-GBC wanted CO2 control for occupancy comfort. Energy efficiency was also key so a low carbon unit, such as the Lo-Carbon T-Series, was essential. Now completed, the project has achieved the lowest embodied carbon footprint ever recorded for an office refurbishment in the UK, with the embodied carbon footprint 22 per cent below a comparable “standard” fit-out.

“It’s 30 years since we first launched the T-Series and it has become the UK’s favourite commercial fan. Known for its robustness and reliability, the T-series’ high quality design has stood the test of time and has evolved with new and improved motors, impellers and grilles.”

Wellbeing measures were another important element of the project and were incorporated into the design in order to improve staff satisfaction, productivity and overall health and wellness. A study by BESA found that 70 per cent of office workers believe poor workplace air quality is having a negative effect on their day-to-day productivity and well-being, and a third are concerned that poor indoor air quality could be having a negative effect on their health. Meanwhile, the report from WorldGBC ‘Health, Wellbeing and Productivity in Offices: The next chapter for green building’ states that the health and productivity benefits of good indoor air quality (IAQ) are well established. With this in mind the UK-GBC office’s innovative ventilation system, which includes Vent-Axia’s Lo-Carbon T-Series fans, has delivered a massive 750 per cent increase in background fresh air provision.

For further information on the Lo-Carbon T-Series and Traditional T-Series, as well as other products and services offered by Vent-Axia, visit www.vent-axia.com or telephone 0844 856 0590. 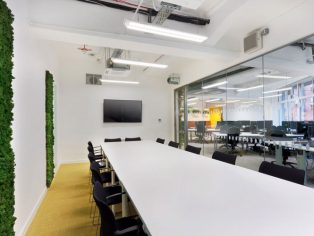