A team of internationally acclaimed velodrome designers from FaulknerBrowns Architects, is embarking on a 76 mile charity cycle to celebrate the 20th anniversary of the UK’s first purpose built indoor cycling facility, The National Cycling Centre in Manchester.

This Friday, twenty-five architects from the award-winning practice will be joined by more than sixty clients and consultants to help raise much needed funds for ‘Get Kids Going!’. The charity which provides funding to help disabled young people participate in sports events around the world.

The National Cycling Centre was developed as part of the city’s bid to host the 2000 Olympic Games. It houses a 250 metre track covering 10,000 square metres and has been hailed a ‘GB training venue for world success’ following the accomplishments of cyclists including Sir Chris Hoy and Yvonne McGregor.

Although essentially designed to house an indoor cycle track, it serves as a versatile multi-function facility for the wider community and has held a series of non-track sporting events such as the recent National Taekwondo Championships and the National Cheerleading Championships. It has even hosted Summer and Winter Beer Festivals.

The charity cycling event has been organised by Mike Hall, a partner at FaulknerBrowns who heads up the leisure and sports team. Mike said:

“We’re passionate about the creation of innovative cycling facilities, particularly those that set new standards in community usage. It’s for this reason that we decided to raise money for Get Kids Going! to help make it possible for all youngsters to embrace and participate in sport and become the sporting heroes of tomorrow.”

“The construction of this velodrome set industry standards twenty years ago and we’ve gone on to design a further eight cycling centres, with a velodrome currently on site in Toronto and another at an advanced stage in Edmonton, Canada.”

“Faulkner Brown’s iconic design for the velodrome has stood the test of time and there is little, even after 20 years of usage, that I would change. Instantly recognisable, it is a great place to visit and to work in. The building has become a much loved part of Britain’s sporting landscape, widely recognised as one of the leading venues of its type in the world. Without it, the GB team simply would not have become the world force in track cycling that it is today.”

Donations for the charity cycle can be made via the link below and are greatly appreciated: http://uk.virginmoneygiving.com/velo2velo 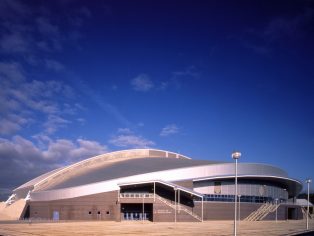 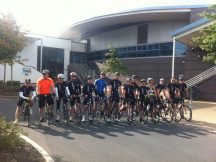