With open and semi-open common areas, residences, commercial-function areas and educational structures, the “Sharjah Urban Renewal Project” designed by TAGO Architects will contribute to the economic and social development of Sharjah, which is the long-established industrial centre of the region.

Producing projects in its Europe, Central Asia and Far East in Tokyo, Bucharest, Kiev and Dubai offices as well as İstanbul central office, Tago Architects, led by Architect Gokhan Aktan Altug, signed an urban renewal project, which will be implemented in an area of 75,000 m² in Sharjah, which is one of seven emirates and the third largest and crowded city of United Arab Emirates. The project, which will be started to be built in 2020, aims to make significant contributions to the development of the regional industrial centre Sharjah with its open and semi-open common areas, residences, commercial-function areas and educational structures.

Locating of two educational structures, which constitute the education function that is one of the important elements of the project, in which Tago Architects, first of all, addresses distribution and functions of the blocks within themselves, has been prioritised because of that the educational structures are detailed and space-occupying buildings. Residences and commercial units are located to the areas remaining from educational structures. Within the scope of the project, a planning study has been carried out to the extent of the locations of crosswalks, underpasses and traffic lights on the T-shaped main lines.

The blocks designed within the project have been shifted backward at the corners according to the city plan and small-scaled squares have been created. Thus, the urban structure, which is desired to be developed and become the grid plan in a planned way, can be complied with. In the project where geographical and cultural data is one of the main design criteria, a controlled courtyard has been created by covering over the mall structure. The elevation of garden was shifted 1.5 meters downward from the elevation of residences to ensure privacy. The courtyard has been separated by a two-part screen and independent areas were created for women and men with two pools. Common area need has been met by creating a square at the centre.

The project has been designed in accordance with very hot and sunny climatic conditions of the region. In the master plan, natural ventilation feature has been provided especially by creating narrow streets on sidewalks. The renewable GRC coating material used on the facade has been a good solution for removing the damages caused by exposure to hot weather and sunlight throughout the year. In the facade design, an approach, which regards comfortable indoors and is not so transparent, has been adopted. Shaded areas have been created with the arcades placed in the commercial areas with the aim of being the streets active during the day. 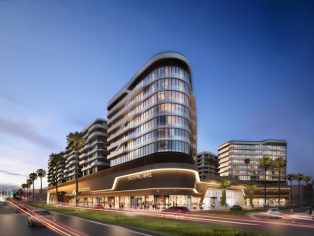