Jess Unwin visits Microsoft’s new base in Paddington to see how transparent and flexible workspaces encourage collaboration, reflecting a ‘sea change’ in the IT giant’s approach.

Anyone who has worked in an open plan office has given in to the temptation to email a colleague who is just a few paces away across the floor.

Undoubtedly convenient but also somehow disconnected on a human level, this ‘digital dialogue’ – as studio head at Microsoft’s Lift London studio Lee Schuneman described it – was something he was looking to discourage in phase two of the firm’s relocation to a new home.

Part of his vision for floors seven and eight at 2 Kingdom Street, Paddington was staff benefiting from a more ‘analogue’ relationship. Surprising language given Microsoft is a tech giant – but getting people up from their desks to talk face to face is part of the company’s strategy to create shared, transparent and flexible workspaces that encourage collaboration.

Architects Gensler were asked to deliver those workspaces when they took on the project in November 2015. The two-floor refit started just as phase one of the relocation (on floors four and five) was being completed. The overarching plan for phase two was to bring further Microsoft business groups – including the Lift London and SwiftKey engineering teams, but also Bing, Xbox and HoloLens – under one roof, reflecting the company’s aim to establish an integrated London base.

Gensler were already working on Microsoft’s European HQ in Dublin when they got the call to take on Paddington. Stuart Templeton, lead interior designer and associate at Gensler, soon understood the two biggest challenges ahead.

Firstly, a modest budget for the combined accommodation of 4,830 m2 would mean imaginative and creative design solutions.

Secondly, the designs would need to win over some of the people who were to use the office spaces. In particular, the Lift London and SwiftKey teams, who were moving from very different environments at offices in Soho and Southwark respectively.

Templeton says: “Both these groups are staffed by younger people with a strong start-up mentality and there was some nervousness about relocating to a more corporate setting.”

Happily, the project coincided with a sea change in thought at Microsoft that has helped Gensler recreate the start-up energy, creativity and general ambience that the Lift London and SwiftKey teams wanted.

Templeton explains: “It’s an interesting time to work with Microsoft. Previously they’ve had an office design manual for architects which was pretty prescriptive: you know, put a table here that’s this height, a screen here of this height. But, of course, that was producing a commonality that they’ve decided to get away from.

“Now, there’s a new design language for their offices that gives architects and designers much more flexibility in how space can be laid out to be more suited to the end user.”

Spaces to suit all needs

Although the two floors were treated as two separate projects, both had the same objective: a working environment for Microsoft engineers and designers consisting of myriad spaces where they can discover different locations to suit their needs, whether that be formal, informal, quiet, or lively.

And, in recognition of the ever-changing nature of tech work, the spaces had to be sufficiently fluid and flexible so that they could be tweaked and rearranged as the teams’ needs changed.

The work was completed earlier this year. Beginning with floor seven, visitors find at its centre the Refresh Hub – a dynamic, open space that’s slightly hard to define. One part feels a little like a university campus canteen and/or common room as a result of its kitchen and functional tables and chairs. Yet nearby are lounge areas with stylish armchairs, coffee tables and carpets. There’s even room for a drum kit and guitar amps for staff with musical talents. Much of this area features the relative luxury of timber flooring, while overhead there’s a stripped-back aesthetic with ceiling tiles removed to reveal services. The result of this mix is a vibrancy that is relaxing and inviting – exactly what Microsoft wanted.

Templeton says: “The space on floor seven is mostly occupied by Lift London, who were used to having the energy of Soho on their doorstep at their old home. They were also familiar with Soho House , which they liked because of the intimate, textured ambience, and because it had a certain exclusivity. Putting those themes together with Paddington’s history around the railway station, we thought

there was an interior design dialogue we could tap into – Soho meets Paddington.”

Despite the absence of very many physical barriers, the neighbouring HoloLens ‘client’ space is quiet, providing a library-like environment of focus and peace.

The floor also features plenty of more ‘traditional’ working areas – but subtle steps have been taken to encourage staff not to be too tied to their desks. Templeton says: “Small things have had quite an impact. Things like removing storage pedestals under desks, everyone using laptops rather than desktop PCs to encourage flexible working and sit/stand desks for staff that wanted them.”

The reduced number of meeting rooms is another key aspect of the interior design ethos. Templeton says: “There are fewer meeting rooms here than I think I’ve ever planned for an office. Again, the idea is to get people to collaborate in more flexible, transparent spaces.”

In the same vein, Templeton says the engineers’ tech requirements have been set up to be ‘super flexible’. He explains further: “The tech isn’t embedded in partition walls, and there aren’t screens set up around fixed furniture in a meeting room. Staff wanted to be able to set up whatever they want, wherever they want it. In fact, anytime I’ve been at the office, spaces are being used in a slightly different way.”

On floor eight, occupied by SwiftKey, the aim was again to create shared, flexible workspaces for a young, creative team who wanted to retain the informal environment of a start-up.

Although much of the previous tenant’s layout was retained, doing away with several meeting rooms allowed for a much more open-plan setting. Sunken lounge areas were also created as collaboration zones.

As with floor seven, the existing SAS plank metal ceiling system was partially stripped out, exposing services and giving additional height up to the slab. Pendant lighting was also installed to create more areas of ambient lighting.

But the signature touch here is specialist joinery, which is used to help divide spaces. Templeton says: “On this floor our idea was to create an aesthetic that would be canal warehouse – again tapping into Paddington’s history – meets London markets. The timber partitions we created give the impression of what you might find in an old warehouse, while using the influence of London markets by installing artwork collections to animate spaces.”

It wasn’t something Gensler had control of, but it would be remiss not to mention the floor-to-ceiling glazing of this impressive office building: it offers eye-catching exterior views of London’s skyline, and equally dramatic interior views of the fullbuilding-height central atrium.

Sticking to budget with sustainable solutions

Getting maximum design impact within the available budget was certainly the project’s biggest challenge, says Templeton. “I think we did just that, and we enjoyed coming up with solutions that we might not otherwise have considered. More money might have meant an uplift in finishes but the design concept would still have been the same – and there should be a way to achieve that whether you’ve got £100 or £1,000 to spend. We worked closely with the contractor on sourcing materials, which fostered a very positive collaborative process.”

A major contribution to both affordability and sustainability was the relocation/reuse of existing Microsoft furniture and kitchen equipment. Templeton says: “Much of the furniture was about functionality rather than brand names – in line with the stripped-back, start-up ‘vibe’ the end users were comfortable with. The company had plenty of furniture across their campuses, some of it under stairs and in stock rooms. Around 60 per cent of furniture at Paddington has been relocated there – a saving that allowed us to spend on the new timber flooring on floor seven, which was a nod to the luxury of Soho House.”

A design rethink of that timber flooring prevented the need to buy new electrical busbars, while, in other areas carpets were removed to reveal the existing raised floor tiles. Templeton explains: “Microsoft design guidelines talk about elevating the ordinary and this is an example – we polished the tiles and added vinyl graphics to turn the ordinary into something more.” Elsewhere, reclaimed timber crowbars, once used to lift railway tracks in the area, have been repurposed to create tailor-made space division.

Lift London and SwiftKey staff have been making use of their new Paddington home for some months now. Lift London’s Lee Schuneman says: “We set out to rethink the way we work together as a team, with a new environment designed around the principles of transparency and collaboration.”

Talking about how the new spaces have gone down with the firm’s staff, he adds: “The space has been enthusiastically received and people are using it in a way that suits them best – which was one of our main goals. The feel of the place has always been really important to us, and employees comment on how positive it is. It’s an environment where they can do their best work.”

Gensler’s Templeton happily agrees that Microsoft staff’s initial apprehension around the project has melted away. He says: “Of course it really helps to be able to engage with end users like Lee – that always creates for much better design.” 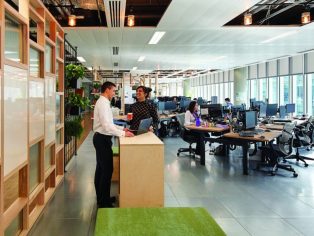 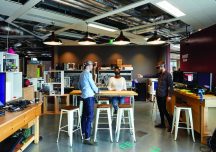 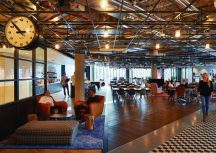 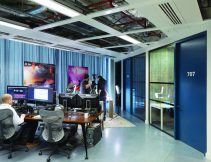 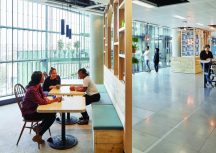