University of Wolverhampton students have been busy working in collaboration with Townscape Heritage Partnership to construct a model of heritage buildings situated on Queen’s Street in Wolverhampton.

As part of their classes on History and Theory of Architecture, first and second year students have had the task of surveying, researching and documenting the buildings, which are set for a major and comprehensive revitalisation project – supported by the Lottery Fund.

As part of their coursework, students have also produced an accurate and detailed model of the street, as well as developing posters that formed the central pieces of an exhibition which was held as part of the projects formal launch.

The event, which took place in the City’s Art Gallery, was led by the Queen Street TH Partnership, which involves Wolverhampton City Council, the Art Gallery and the University of Wolverhampton, among several additional partners.

The exhibition displayed the first large-scale and accurate model of the historic street along with Building Facades Boards that showcased the city’s valuable architectural identity, character, style and built fabric.

Dr Mohamed Gamal, Senior Lecturer for the School of Architecture & Built Environment at the University of Wolverhampton said:

“The Collaboration with the Townscape Heritage Partnership was a fantastic opportunity for our architecture students to engage with real projects and local community groups to develop one of the city’s most valuable heritage assets.

“Our students spent several weeks researching the archives, working with local stakeholders, such as Friends of the Archive, and surveying the buildings and their social history, to produce a practical and accurate model for their first research-led coursework.

“The University encourages the integration of research, practice, and community engagement activities within its curricula, and this project is a good example of such practice.”

The produced models and posters will also be on display at several other exhibitions and tours throughout 2016, including the Science Festival, and the RIBA West Midland ArchiTruck exhibition which is set to take place in July. 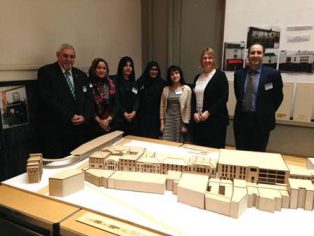