Held on Saturday 19 November at De Montfort University’s impressive new  School of Art and Design building in Leicester, the event was as a one-day, charrette-style competition, designed to inspire collaborative team work and offer valuable experience of responding to a design brief, planning ideas and honing presentation technique.

With several student teams competing on the day, the event brought together some of the UK’s finest aspiring young design talent. Each student team was nominated to compete by educators from Interior Design and Interior Architecture courses across the UK. Students were gathered into groups of six, with an experienced interior designer and BIID member providing guidance and advice throughout the challenge.  These BIID mentors included Past President of the BIID, Diana Yakeley OBE, Lori Pinkerton-Rolet, Ciara Langley and Yentl Flo.

This year’s brief focused on the global refugee crisis and the urgent need for temporary accommodation across the UK. The brief challenged the competing teams to redesign a space in De Montfort University’s School of Art and Design, as temporary refugee accommodation for 60 people.

Students were asked to consider the space, taking into account its multi-functional use, as a place for residents of all ages to sleep, eat, study, pray and spend leisure time in, as well as create private areas for confidential meetings with healthcare providers, solicitors or other advisors.

Teams had just six hours to develop a proposal, before presenting their CAD-free designs to a judging panel led by BIID President Susie Rumbold and made up of experts in the field who have first-hand experience of living in a refugee camp. The judges were looking for a design solution that met the brief and demonstrated creativity, problem solving and team work.

The BIID would like to thank all of the judges who took part in the challenge:

After much deliberation, the judges cast their vote on the design credentials of each submission, as well as the individual input and group work of each team. The University of Hertfordshire team mentored by BIID member Ciara Langley of Harriet Anstruther Studio, were judged to have created the most innovative proposal, with the University of Lincoln team being named as Runner Up.

“The calibre of the student’s work was hugely impressive and they showed real creativity and innovation in their responses to this topical brief.” comments Susie Rumbold, President of the BIID. “The BIID aims to support interior design professionals from the earliest stage of their careers and this competition is a great way to encourage and inspire the student design community.”

The BIID would like to congratulate the winning team and all participants of the 2016 BIID Student Design Challenge. 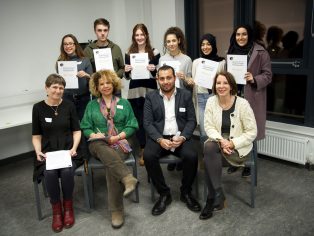