The Maxwell Centre at the University of Cambridge officially opened on Thursday, 7 April.

BDP designed the £26 million new building which is a centrepiece for cutting-edge blue skies research and industrial partnerships in the physical sciences, located in the heart of the West Cambridge science campus.

Bringing together some of Cambridge’s unique strengths in physics, materials science and engineering, it will pioneer new, interdisciplinary approaches to fundamental science and to solving some of the biggest global challenges of the 21st century.

Research scientists from industry will occupy laboratory and desk space alongside the Cambridge research groups, to promote a two-way flow of ideas and expose the best early career researchers to scientific problem-solving that relates directly to industrial need. 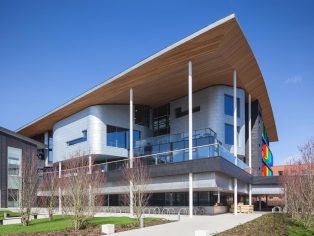