The Hellin-Sebbag office began work in 2004 on the Saint-Charles Hospital site at Montpellier.
Delivered in 2011, the first phase converted the general hospital into university buildings for graduates and researchers in the Faculty of Humanities, Paul Valéry University.

Patience and perseverance were necessary to restore new life to a site at this scale.

The second phase redevelops 6,377 m² within wing called the “Incurables”. The ground floor accommodates the public for international conferences and symposiums while the research work spaces are located on the first and second floors.

These meetings require seminar rooms on the ground floor, but especially, an amphitheatre which seemed almost impossible within this 18th century building with an unsuited load-bearing structure. However, we succeeded in inserting a 100-seat amphitheatre that occupies the full width of the central wing of this very narrow (10.5m wide) and vaulted (5.3m high) building.

While the first building, dating from the 17th century and originally intended for the poor, had been built crudely in rendered rubble stone with few façade openings, the 18th century wing of the Incurables was built in cut stone, with many decorative elements (medallions, parapets, cornices) and large windows. Despite their functional similarities, the two buildings have qualitative differences which led to two different architectural approaches.

The Mediterranean garden: existing plane trees have been preserved, but to create a visual continuity between the Incurables courtyard and the street slightly above, white concrete terraces were developed to accommodate a diversified native vegetation.

To plan the room layout on the ground floor, we designed a contemporary extension, a winter garden, made up of lightweight elements: a metal structure, a wooden floor and movable glass strips that enable to see, in transparency from the outside, the beautiful rehabilitated facade of the building.

Motorised Colt glass strips close quickly in case of rain, strong wind or a cold change. They enable to adequately ventilate the space in summer or, on the contrary, to create a greenhouse effect during winter.

Perfumed by orange trees in pots, with its pleasant layout, the winter garden becomes the centrepiece of the building, a transitional space – neither interior nor exterior – between the restored stone building and the beautiful Mediterranean garden. In contrast with the rough surface of the stone, its reflective ceiling contributes to create an atypical space between sky and earth.

Articulating the old with the contemporary
The contemporary extension was designed as an autonomous box articulated with the old building by “voids” to avoid direct contact. This way the roof, an external surface covered with glass slabs, is separated from the stone facade by a glass roof while the floor is detached from the ground by a planted bank.

While the amphitheatre and the winter garden display a certain opulence of colours and materials, with their white vaults and poured concrete floor, the entrance hall and circulations are deliberately treated in a more monastic manner. Similarly, contemporary technical elements, such as lighting or signage, are judiciously integrated to reinstate the sobriety of the former hospital volumes, and reveal their geometric purity.

Due to the “raked” metal structure which supports prefabricated concrete steps, the amphitheatre slips between the thick facades of the building without touching them so as not to alter the volume of the vaults under which it is inserted. Structural glass railings assist to avoid this contact.

Convection heating is located under the seats, whose colours takes up the palette in the building (green on 1st floor, blue on 2nd floor) to create a serene space within the volume of white arches.

Floor and walls are respectively dark and light grey to highlight the curve of vaults underscored by artificial light.
The auditorium also benefits from good lateral daylight on its two elevations. Motorized blinds provide total occultation.

In seminar and meeting rooms, the articulation between old and new is systematically highlighted by specific finishes: hollow skirting boards finish the poured concrete floor which does not touch the existing walls. Acoustic panel wall linings are articulated by a wide hollow joint to meet the vaults, acoustic panels, as well as light fittings, are suspended.
The ground floor reference colour yellow is found in several elements.

Stone facades restoration:
In the 17th century first building, it was necessary to “undertake demolition, rebuild and reinterpret”. In the Incurables wing, much of the work consisted in the restoration of the facades and beautiful stone staircases and restitution of the 18th century joinery requested by the Direction Régionale des Affaires Culturelles (DRAC), Ile-de-France.
Many damaged facade stones had to be replaced. As such, it was necessary to reconstruct several openings modified inadvertently over time and replace many damaged steps on stairs that required the installation on site of a proper stone cutting plant to produce lintels, supports, jambs and steps. 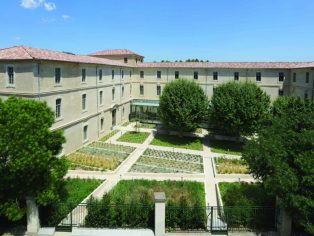