Architect and TV presenter George Clarke has been awarded an honorary degree from the University of Wolverhampton.

George, whose latest series of Amazing Spaces returned to Channel 4 last week, was presented with an Honorary Degree of Doctor of Technology from the Faculty of Science and Engineering at Wolverhampton Grand Theatre on Friday 25 September.

He praised the University’s plans to develop the Springfield Campus as an international centre of excellence for training in the field of construction including the West Midlands Construction UTC (WMUTC) and pledged his support for the initiative.

On receiving his honorary degree, he said:

“It was fabulous when I was told I’d be given this award. I will help and support in every way that I possibly can to inspire the next generation of construction passionate people from the University.”

George said he had wanted to be an architect since the age of 12 and had been inspired by his grandfather:

“My grandad was a grafter and a builder and he passed his knowledge, his passion and his experience on to me.”

He also spoke about the success of his Empty Homes initiative, bringing disused properties back into habitable use, and how its related mentoring and apprenticeship scheme had helped more than 1,500 young people.

“George is an inspirational figure and a genuine ambassador for architecture and the built environment.”

Following the ceremony George visited the former Springfield Brewery site in Wolverhampton, which is being redeveloped by the University is into a hub for construction education. The £70 million project will transform the derelict site and become home to the University’s School of Architecture and the Built Environment, as well as the West Midlands Construction University Technical College.

On visiting the site George said:

“The University has got great plans and ambitions to do lots more things for architectural and construction education. I think its brilliant the University has secured this site. To make something stack up economically and fund the purchase of something like this and then put funding in place to bring it back into use is just amazing.

“I’ve seen far too many breweries and historic sites being demolished and lost forever. This is a place that means a lot to a huge amount of people and the City of Wolverhampton.”

George also paid a visit to RAF Cosford in the afternoon to view a project the University is involved in with the museum to convert a VC10 aeroplane into a teaching space.

George is Creative Director of architectural practice George Clarke + Partners and recently set up an independent television production company, Amazing Productions to focus on factual programming for all the main UK broadcasters.

He also enjoys lecturing and is passionate about the way architecture can transform our everyday lives; his aim is to make architecture popular and accessible to everyone.

George is an ambassador for Shelter, Maggie’s Centres, The Prince’s Foundation for Building Community and City & Country Group – one of the UK’s leading restoration specialists. He is also patron of the Civic Trust Awards, established to recognise outstanding architecture, planning and design in the built environment. 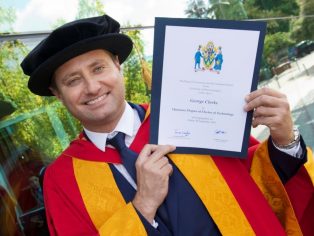 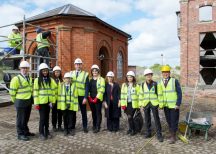