The Giant’s Causeway Visitor Centre in Northern Ireland has been awarded three different accolades at this year’s Royal Society of Ulster Architects (RSUA) awards for its sustainable design.

WYG, in conjunction with Heneghan Peng Architects, Gilbert-Ash Ltd and the National Trust, is celebrating achieving the Design Award for projects over £3 million, the Liam McCormich Prize for Building of the Year and also the DoE Planning Award for their work on the centre.

Engineering specialists from the Belfast office of WYG, a multidisciplinary consultancy, were commissioned by the National Trust to provide expertise on the civil engineering design of the visitor centre, which attracts more than half a million tourists every year.

The centre’s new facilities, which include an exhibition space, café, kitchen, retail space and staff areas, have been designed to blend in to the natural rural environment via re-establishment of the ridge-line by use of a part buried structure.

The centre has already been awarded the BRE Environmental Assessment Method (BREEAM) ‘Excellent’ Design Stage Certificate due to the cutting edge techniques employed in the design and supporting infrastructure.

WYG ensured that there was minimal impact on the adjoining conservation areas including listed features, as well as developing a stormwater interception system to protect the habitat of the Narrow-mouthed Whorl snail.

“We are thrilled that the Giant’s Causeway Visitor Centre has been awarded not one, but three industry awards for its sustainable building design.

“The design of the centre was focused on sustainability and energy efficiency but also ensuring it remained aesthetically pleasing and complimentary to the fabulous Antrim coastline. It was this focus, alongside a requirement to provide value for money, which made the entire project so exciting and thrilling to work on.”

Max Bryant, manager for the National Trust on the north coast said;

“In 2013 we welcomed more than 750,000 visitors to the Giant’s Causeway World Heritage Site, and we are very proud of our world class visitor centre. The design and sustainability of the building was hugely important for us, and it is now paying off through a huge impact on the Northern Ireland tourism economy. Most importantly, our visitors are leaving with lasting memories of this very special place.” 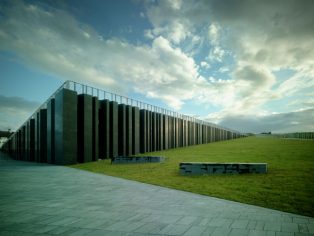