Today sees the installation of the first of 75 trees on the roof garden of Depot Boijmans Van Beuningen in Rotterdam, the first publicly accessible art depot in the world designed by MVRDV

Over the next two weeks, 75 large birches will be hoisted 35 metres in the air using a special crane and planted on the roof of Rotterdam’s Depot Boijmans Van Beuningen by project contractor BAM Bouw en Techniek. Here, the trees will become part of a green rooftop forest with a restaurant and spectacular views over the city.

The forest was designed together with MTD landschapsarchitecten from Den Bosch. The chosen tree is the Betula pubescens, a soft birch that grows to a maximum height of ten metres and is highly resistant to the weather conditions on the roof. The trees are between ten and fifteen years old and over the past three years the Ebben tree nursery has prepared them for their new location. A special watering system ensures that the soil in which they are being planted will never dry out.

Aftercare is provided by a specialised arborist who regularly monitors the trees for vitality, health, and moisture. How long the tree continues to live depends on various factors such as weather influences but it is expected that the vast majority of these strong pioneer trees – which need little to survive – will remain standing for several decades.

“When Yves Brunier designed the Museumpark with OMA, I helped with the selection of the old trees”, says MVRDV founding partner Winy Maas. “Now that the birches are being placed on the roof of the Depot, the circle is complete; we are taking the park we removed to the top of the Depot and enlarging it. Soon, people will be able to take the express lift up, free of charge, and enjoy a spectacular view of the city at a height of 34 metres.”

The Municipality of Rotterdam will soon start work on the greening of the area in the north of the Museumpark, both within the park and immediately outside its boundaries. The area will have natural stone paving with lots of planting areas and trees. In addition, the ponds and event deck outside Het Nieuwe Instituut will be redesigned.

MVRDV gave the circular 39.5-metre Depot as small a footprint as the programme allowed, in order to leave as much of the park intact as possible. Thanks to the mirrored façade panels, the building reflects both the park and the city. The Depot gives visitors the opportunity to view the museum’s 151,000 artworks even when they are not being displayed in the museum’s curated exhibitions, and thanks to the building’s five zones, each with its own individual climate environment, private and corporate collections can also be preserved in the building under museum conditions. The Depot is expected to open its doors in September 2021. Before that date, the building will be accessible once, in an empty state, during the Open Depot Days on 25, 26 and 27 September 2020 before the major art move begins. 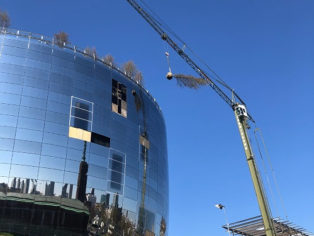 Over the next two weeks, 75 large birches will be hoisted 35 metres in the air using a special crane and planted on the roof of Rotterdam’s Depot Boijmans Van Beuningen Image: © Arjen Ketting, MVRDV

The chosen tree is the Betula pubescens, a soft birch that grows to a maximum height of ten metres and is highly resistant to the weather conditions on the roof Image: © Fred Ernst 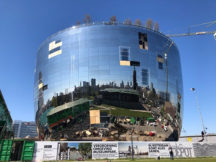 The trees will become part of a green rooftop forest with a restaurant Image: © Arjen Ketting, MVRDV 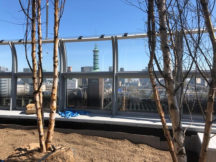 From the roof terrace, visitors will soon have spectacular views over Rotterdam Image: © Winy Maas, MVRDV