Bus and rail shelters are rarely seen as works of art but the copper-clad shelter for a new road-rail intersection in Lahti, Finland, is something of a metal masterpiece. Michael Willoughby reports from the Land of the Midnight Sun.

What if the bus stop was actually the destination? That’s what Finnish firm JKMM Architects envisaged when they created the new Travel Centre in Lahti, a shining copper structure helping passengers transition between the city’s road and rail transport. Surely there is no better way to mark an arrival into a place than by creating a noteworthy structure ­– first impressions last.

Both local and bus lines set off from beneath the stunning 60 m-long canopy and the waiting area is connected to the long-distance bus terminal by lifts and stairs in three towers. The centre also includes three local bus stop shelters at street level and an 80 m tunnel beneath, for which the designers created cladding.

The travel centre connects visually with the station, which is protected by Finland’s ‘National Board of Antiquities’. The two structures are carefully thought out and minimalist in their own right; they are also both red, with the railway station built in 1935 as a brick structure designed by architect Thure Hellström from the VR Group.

“As the most prominent element of the new Travel Centre, the terminal canopy initiates a dialogue between the new and old elements. Its minimalistic sculpture-like form embraces the history and value of the area,” explains chief designer, architect and JKMM partner Samuli Miettinen.

The main design solution was created in preliminary design. The contract was agreed by the city and the architect acted as sub consultant, initially for the traffic engineer and then for the construction engineer.

“The design inspirations were founded on the ‘economic, contextual and structural approach’ familiar with great Scandinavian design. Nonetheless, the principles were mostly new, with a hint of Alvar Alto, Finland’s most famous architect.” says Miettinen.

“We had no other special source of inspiration for the project than our own process and design history. For the aluminium cladding of the drive-through tunnel we were inspired by the noise barrier design of Tuukka Vuori of Playa architects – which also reminded us of the undulating ceiling of Aalto’s Library in Viborg (Viipuri).”

“After presenting various options to the clients, the City of Lahti and the City Museum of Lahti, they selected copper because of its durability, feasibility and dignity. We used the material in a fairly straightforward manner – and the shape of the shelter strengthened the exciting horizontality of the surrounding buildings. And, as in many great projects, collaborating led to the growth of brilliant ideas.”

“Our scope of work was small compared to some building projects but we consider it significant when it was a question of how to achieve the specific architectural objectives of the client.”

The first sketches of the project consisted of uncovered stairways but the design gradually evolved. Aluminium cladding was specified to cover the tunnel’s acoustic panels while the staircases were incorporated under the same roof as the elevator structures. The element which developed the most was a tunnel for bicycles and pedestrians.

“We were able to convince the client about the need for a consistent architectural approach. Uniform articulation consisted not only of the treatment of the canopy, bus stops and stairwells but also the additional surrounding structures – entrances of tunnel, bollards, handrails and so on.

While seemingly simple, creating the copper coverings was a complicated matter. Latvian company Three L Technologies assembled them using a hidden fixing incorporating a glue layer which kept the copper and aluminium surfaces separate. If they touched, chemical corrosion would occur.

Although copper is the most obvious material in the travel centre project, glass and aluminium play their part as well. Copper covers both the canopy and the columns of the shelter, but the airy elevator tower is made of glass and the shell inside from copper wire. The shaft is a kind of counterpoint to the streamlined silhouette of the canopy. Part of the scheme involved the creation of the bridge, which is clad with anodised aluminium panels.

The design team was set the task of creating a “total infrastructure”, i.e. one which also “made sure that the human element was considered,” says Miettinen.

The City of Lahti created a brief with their own designers while travel planners Trafix, who brought JKMM onto the project as sub-consultants, worked on developing models for the circulation of bus traffic to ensure that everything was up to scratch.

“Overall, we have gained a good understanding of infrastructures and hybrid typology,” explained the lead architect. “We studied traffic and transportation typology including the Herttoniemi hub and Kruunuvuori aerial cable way, where perforated metal envelopes were used in the Verkatehdas Cultural Factory, Seinäjoki Library and OP Headquarters, as well as in the Jyväskylä Music Hall – a project which is still at preliminary design stage.”

The architects used this knowledge to accommodate a bridge spanning over a lower level street. They had to remodel the entire vicinity in the process, liaising with the traffic designer, the city planner and the authorities of a nearby museum.

However, with Finland being famously lacking in sunlight for half the year, and the Travel Centre being in use all year round – and around the clock – lighting was a key consideration for the project’s designers.

In order to foster a harmonious and warm feel for the tunnel, JKMM used sophisticated RGBW lighting technology. Ambient lighting is the order of the day, but the lighting inside the tunnel can be changed for special occasions.

While dealing with the construction subcontractor, the team concentrated on visualisation and 3D modelling, handling geometry and lighting solutions to make sure things were well lit and proportionate.

Meanwhile, the electricity and HVAC equipment is hidden inside the structure and varied light sources have been placed behind perforated copper panels to enhance the character of the copper parts during the darker seasons. The exterior also hides a noise reduction system as well as atmospheric lighting to ensure both acoustics and visuals offer the best experience for the traveller.

If creating a design that incorporates traffic, heritage and aesthetics was difficult, so was the construction process:

“The construction site was demanding because of the active city life around it as well as keeping traffic running under the new bridge,” says the lead designer. “It was all accomplished piece-by-piece, with clear break points between the different stages of construction.”

While the locals complimented the shelter’s modern design and the environmental boost and functions it brought, there had also been complaints.

The cost, which climbed from €17.8m (£15m) in the original brief to €19m (£16.1m), unsettled some. There have also been complaints from drivers about the glare from the copper, but the metal will eventually oxidise and lose its shine.

Another strain of concern came from the fact that the structure is no shelter from the storm, lacking facilities shielding from the rain, wind and cold. Miettinen admits the original brief didn’t include “warm inside spaces or exact guidelines for special fixtures”, but adds this can change and then the project will be “redeveloped according to necessity.”

Hopefully, all these concerns will dissipate in time as the Travel Centre keeps generating a sense of arrival and departure for visitors to Lahti and its citizens. 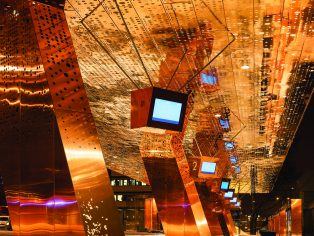 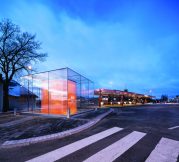 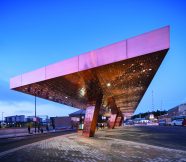