Trash talk: how to build a huge industrial plant and have people thank you for it

Despite the many environmental benefits of EfW plants, they often face local opposition and get dubbed “incinerators.” As recently as September, a 400,000 tonne Veolia scheme in Hertfordshire was refused planning by the Communities Department following a three year battle.

So, in planning for a plant overlooking Suffolk’s Gipping Valley, an area of nature reserves and waterways, Suez (formerly SITA) could be expected to make an effort. Instead, it pulled out all the stops, creating a fully-landscaped, BREEAM Excellent-designed, CABE accolade-laden gem of a building.

The £180 million plant in question burns around 269,000 tonnes of black bin (residual) waste annually to produce power for 30,000 homes – approximately the size of Lowestoft, the county’s second-largest town. And, as well as providing power, metal which survives the intense heat of the process is recycled. The resulting “ash” or bottom waste is used as a building aggregate.

Finally, heat from the energy-generation process could be used to turn Suffolk into one of the UK’s most important tomato-growing regions. All this is a win for the county, as residual waste would previously have ended up in landfill.

Finding a balance
They asked multi-award-winning architect, GRIMSHAW, to create a balance between “industry, nature and community.”

The team followed two main principles when designing the plant to reduce volume and to hide what was left in plain site. So they created larger, distinct volumes in order to reduce the overall scale of the plant and to improve architectural appearance.

Secondly, the bulk of the building was hidden more traditionally by the use of both landscaping and – radically – helping the vast boiler hall structure disappear into the countryside and its sky.

A dual-layer cladding system with a semi translucent inner skin softens its appearance against the sky, and a bespoke horizontal louvre system on the outside alters the appearance of the building depending on angle of view and time of day. The design also draws upon the architectural-industrial heritage of the area and the image from Paper Mill Lane shows how the structure glimmers in the sky.

When the plant is seen in all its glory, those approaching find a mass set back from the entry point and taking advantage of the new landscaping. Immediately visible is the glimmering boiler hall and the glazed office accommodation, projected and suspended, above the forecourt to provide safe segregation of pedestrians and vehicles.

These elements are arranged to create an open front and a closed back, hiding the less-desirable parts of the energy facility.

Office workers have stupendous views over the Gipping Valley, while workers inside the boiler room are also treated to more of the outside with large ETFE pillows sitting in the roof to let in as much of the light as possible.

Up in flames
But enough about humans, what is the journey of a piece of rubbish to its fiery (useful) end. Suffolk operates a three-level system whereby recyclable, organic and residual waste are separated. It is the latter which arrives in large trucks which are immediately weighed on a special bridge. The lorries come into the “tipping hall,” and reverse-tip their truckloads into a hopper 37x15x26m. The trucks continue around the one-way system back to the bridge to compare their before and after weight. The bridge method allows factors like fuel-weight to be overcome.

Meanwhile, the trash in the pit is mixed around by a vast grabber, just like the one featured in Toy Story 3. The claw moves the future fuel around so that it is sufficiently aerated to reach the required 850-1,000° C as it is burnt on a grate.

That temperature helps to keep emissions from the factory down to a required level (important even though a sophisticated emissions control is in place.) The hot gases from the furnace heat water into steam to drive the turbine – which generates electricity headed for the transformer in Stowmarket to be distributed over the National Grid.

The leftover “bottom ash”, which is more like clinker, is taken on conveyor belts to be sorted and the final goodness is extracted from it: ferrous metals are removed with a magnet and taken for recycling. The remaining solid material is graded from pebble through to rock size and used as aggregate by local building companies. Even though the plant only opened in the autumn, the material sits under a road serving a new housing development in nearby Stowmarket. The finer (fly) ash is converted into aggregate for low-carbon building blocks.

The water which turned the turbines, meanwhile, is turned back into water in two condensers and goes through the process repeatedly. New water is drawn from the three ponds sited at the front of the project, which also adds to the environmental quality of the landscape.

As well as the tree-planting and ponds on the new estate is a 3/4 acre wild flower meadow, which will get up to full impact in a couple of years’ time.

Also to come is the plant’s heat-providing capacity. At the moment, the heat taken out of the steam as it is condensed is not used for anything. However, the plant is CHP-enabled, so when a suitable project comes along, it can become fully efficient. Such sharing of energy is common in Europe and gaining traction in bigger cities. But, heat being hard to store, a project and a large one, would need to be nearby – and there’s not a whole lot else of sufficient size going on in the region.

On the other hand, Suez is working with local agricultural businesses to plan a vast complex of tomato greenhouses. If successful, the £30 million project would cover 50 acres and supply 7,500 tonnes of the “apple of love” to hungry UK markets.

Suez is partnered with the County Council and The Greenery, a regional distributor of salad produce. But, final go-ahead, along with 200 jobs, rests with the growers’ ability to fund the project.

“We have played our part, but we are not horticulturists!” says a spokesperson for Suez.

In addition to this, SITA Trust provides funding for community and environmental improvement projects within a three-mile radius of the site. So far 11 projects have received £240,000.

An unlikely attraction
Visitors to the plant, who consist mainly of school children, but include curious adults among them, are handsomely rewarded for their efforts.

The visitor’s centre, designed by Cutty Sark Visitors’ Centre-designing practice, DesignMap, has already welcomed 2,000 through the doors, possibly keen to learn about EfW and recycling and to play games that put them in charge of matching a supply of electricity to demand, sure. But I expect most want to go on a tour of the plant, right through the centre, and look right down into the flames of the boiler through a special viewing door.

With regard to its sustainability accreditation, the team is waiting for approval of its BREAAM Excellent rating. However, its architectural design quality is not in doubt.

In 2010, design watchdog, CABE stated: “”We commend the client for demonstrating their commitment to high quality design in industrial architecture in the scheme presented. The design team’s approach to site organisation and built form is exemplary, not least in its effort to ensure the development is specific to its brief and its context.

“We welcome the discipline and honesty in the approach to the form, massing and expression of this facility. The design is both unique to the brief and specific to the place. We welcome the efforts to express the functionality of the building and give a sense of the processes within.”

A beautiful industrial building? An environmentally friendly energy plant? A power station popular with visitors? The project proves that industrial buildings can, indeed, be memorable and that people want to see (and read about) what goes on inside them. 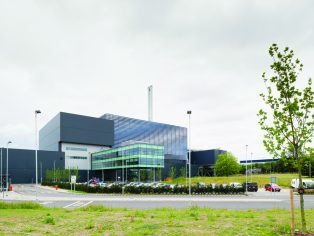 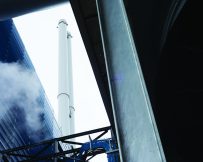