Architects PM Devereux were set the daunting challenge of reinventing an old hospital to provide facilities for the 21st century while also helping break down the stigma of mental illness. Jess Unwin finds out if they succeeded.

So here’s the brief: design a modern facility that helps to reduce the stigma connected to mental illness – but also retain at the same location a Grade II-listed Victorian building.

Tricky? Yes. Now, bear in mind that this is within a prominent residential area, and is a site with varied topography that’s just 2.6 hectares in size. Furthermore, fundamental to the £30m project which has transformed the Farnham Road Hospital in Guildford was persuading the local planning authority to demolish a dozen or so existing buildings.

Despite the size of the challenge, feedback from NHS staff and patients, plus visiting friends and relatives, suggests that architects PM Devereux – who have a considerable healthcare pedigree – have succeeded.

The new 24/7 mental health treatment and assessment facility – run by the Surrey and Borders Partnership NHS Foundation Trust for people in Surrey and north-east Hampshire – has been fully operational since November 2015.

It includes a wide range of shared therapy spaces and four adult wards, one of which provides psychiatric intensive care, that are contained within a two-storey development adjacent to the old main hospital building.

Challenges of Design for Manufacture and Assembly

The story of the new facility’s construction began in earnest in autumn 2013. Mark Carter, senior director at PM Devereux, says winning planning approval to get to that point was one of the project’s chief challenges.

He explains that the brief “was always clear” that removal of existing ancillary structures and extensions connected to the listed building was key to providing space for new, modern facilities.

However, some of the buildings earmarked to go had some limited planning protection (locally and curtilage listed). Furthermore, the look of the redevelopment would have to fit in with the surrounding urban landscape and enhance the setting of the ‘heritage’ asset, i.e the retained buildings.

“There were sensitive negotiations – the planners wanted a new building of quality to replace the mixed-age and mismatched buildings already on the site. Following design development and taking these concerns into account, the planners ultimately felt able to recommend demolition.”

One interesting point in those discussions was the Design for Manufacture and Assembly (DfMA) construction method to be used by main contractor Laing O’Rourke – meaning various components of the new building would be prefabricated offsite.

“The planners originally wanted us to use Bargate stone, which is used in the listed building, but that didn’t fit with the DfMA system.” He continues: “Various sample prefabricated panels were made up to convince them we were creating something substantial, robust and of quality.”

Concrete panels were produced that create stone-effect facades, while elsewhere on the project aluminium rainscreen panels feature colours that echo the yellow tint of Bargate stone and red brick quoining that appears at the corners of the listed building.

The result, says Carter, is a development designed to complement the old building without being a pastiche of it, and offering “something more contemporary and inviting.” The difference in external treatment between ward (typically stone effect) and non-ward areas (aluminium) helps to “normalise the living environment”. He adds:

“When you go from your house to your office or gym, the building styles are different…so this is about saying through design that this isn’t one big institution.”

Carter, who has many years’ experience working on healthcare architecture, believes Farnham Road Hospital is the first DfMA project of its kind in the mental health sector, which meant thought had to be put into ensuring the prefab construction methods used, especially inside the facility, aligned with the particular needs of mental health services.

“You need robust environments because the fabric of the building does get attacked but you also need an environment that limits opportunities for self-harm; for example, panel joints that are always flush. Otherwise, you can create projections from which someone can fix a ligature, creating a safety risk.”

Breaking down the stigma

The wider brief given to PM Devereux was to design a facility for modern inpatient services but also to integrate them into the community – “breaking down the stigma of mental health,” as Mark Carter says. As a main public entrance to the site, the listed building didn’t have capacity for a large welcome area. This was addressed by creating a spine access link through the existing building to a new reception and main entrance area.

“Locating reception in the contemporary setting of the new building was a key aspect. If you’re driving you come into the back of the site and the new development is what you see first.”

Those arriving by foot at the old building progress through a glazed link structure and on into the reception area, which, like most of the new building, also makes use of lots of glass to let in plenty of light. It also hosts a cafe where patients can meet friends and relatives.

“It is very important that the first impressions of the service are modern and welcoming,” says Carter.

The glazing here also gives a view of a large open external courtyard, which is dominated by a substantial tree. This is just part of a completely reimagined and joined-up landscaping plan that replaces “little dark alleyways” in Carter’s words, and includes an outdoor courtyard at ground-floor level at the centre of the new building. Patients on wards at this level can access the courtyard, while those at first-floor level can still have access to fresh air through secure terraces – open to the sky but enclosed.

Dual benefits of a linking spine

The two-storey link that connects the listed building to reception is the beginning of a spine or corridor that runs through the heart of the new building. It’s not just the main circulation route but also a transitional zone that overcomes the difference in levels across the site by using half-level staircases to access wards or therapy spaces.

“Although accessibility is intrinsic to the internal design, there are clear boundaries,” says Carter, “between the secure areas of the wards, the therapy spaces, and areas the public can access.”

The wards are set out in a traditional ‘T’ shape and follow the principle of ‘progressive privacy.’ Mark explains:

“You come into the ward from the linking spine and you have all the front-of-house spaces like offices, patient laundry and patient possessions stores. Beyond that are the spaces where patients will spend most of their time interacting – the lounge, the dining area – at the centre of the ward. Off those main day spaces are the two gender segregated bedroom zones, which are of course the most private areas.”

While interior layout must allow staff to be able to observe patients, Mark stresses the aim is

“respecting the privacy and dignity of patients, optimising the therapeutic quality of the spaces through best use of daylight and making it as normalised a living environment as possible”.

That therapeutic but normalised living environment is supported by a simple wayfinding scheme. Each ward is named after a different species of tree and representations of those trees, sometimes wall height, make it easy for patients to find their way around. Being able to see the site’s green landscaping and, where appropriate, views towards Guildford Cathedral from first floor windows is significant too.

“Connection with nature and society outside is important,” says Mark.

Feedback since the facility opened has been positive. Mark comments:

“I gave a talk earlier this year with a colleague from Surrey and Borders Partnership NHS Foundation Trust who helped us with the design at Farnham Road. We both spoke about how the principles used in the design of Farnham Road – open-plan day spaces that encourage interaction between patients but which are also observable by staff – are really working.

“She cited one patient who was benefiting because the open-plan design and unobtrusive observation has given them the confidence to participate in ward life for the first time.”

Tracey Hayes represents the interests of people who use mental health services on the NHS trust’s Council of Governors. She describes the new facilities as being “in a different league to anything else I have seen.” She adds:

“I am sure it will improve people’s outcomes and lead to shorter stays in hospital.”

“We’ve been fully involved in the design of the project through various trust personnel, clinicians, former patients and carers. Of course, that’s how the trust has approached similar projects in the past, but I think it has been particularly successful this time.”

“We’ve got what we wanted – a feeling of light and space, a less restrictive and more therapeutic feeling, a comfortable place in which to provide these services to the community.” 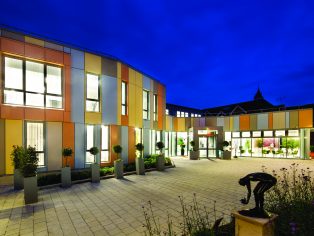 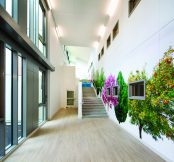