Awards for the best new and conservation church architecture have been announced at a ceremony held at Westminster Cathedral Hall, London on Thursday 6 November 2014.

The Presidents’ Award for new church architecture has been won in 2014 by Evans Vettori Architects for the new hall at St Joseph’s Roman Catholic Church in Derby.

The Presidents’ Award is presented annually on behalf of the Ecclesiastical Architects and Surveyors Association President and the National Churches Trust’s Joint Presidents, the Archbishops of Canterbury and York.

The eye-catching new building in the centre of Derby consists of a multi-purpose hall with kitchen, storage and toilet facilities. A new opening with sliding folding doors, created in the wall of the existing church, allows the hall to be opened up to the church space.

Two projects entered for the Presidents’ Award were Highly Commended by the judges. They were the reordering and restoration of St Bartholomew Church, Wilmslow, Cheshire by architects Buttress, and the design and construction of a small but complex extension to the church of the Nativity of the Blessed Virgin Mary in Studley, Warwickshire by architects John C Goom.

“Evans Vettori Architects are delighted to receive the President’s Award for the New Parish Hall at St Josephs, Derby.”

“For many years, an aspiration of St Joseph’s parish has been to strengthen the relationship between the church and local community. Our brief was to fulfill this aspiration through the creation of an extension to the main church building. The end product aims to convey clarity of concept with simple elegant design, to enhance rather than diminish the importance of the existing church and its central worship space.”

“Financial difficulties led to long delay periods in the project, during which the design was approved by the parish and the Trustees of Nottingham Diocese. When I came to St Joseph’s Parish four years ago, a great sense of pessimism became apparent to me, with cynical concerns amongst the parish congregation as to whether the new building would be large enough or adequate for purpose. Since completion of the Hall, I have not heard a single word of criticism. This is quite remarkable.”

The King of Prussia Gold Medal for innovative, high quality church conservation or repair work has been won in 2014 by Beech Tyldesley Architects for their repairs to the tower of St Michael’s Church, Othery, Somerset.

The Gold Medal was the gift of King Friedrich Wilhelm IV of Prussia in 1857, who was highly impressed with British Victorian church architecture.

St Michael’s is a Grade I listed church with an impressive 15th century perpendicular tower. Work included repair and consolidation of the lias stonework of the tower, walls and buttresses, conservation work to the dressed stonework and careful restoration work to the tower statues and niches. The project has already won the William Stansell Somerset Conservation Building Award.

A project to reinstate the tiled dome at the Grade II* listed church of Our Lady Queen of Martyrs and St Ignatius, Chideock, Dorset, was Highly Commended by the judges.

“Winning the King of Prussia Gold Medal is quite frankly an amazing turn of events. The recognition it gives to this gentle stone repair technique is difficult to understate. A means of preserving friable stone without visible effect has been illusive for years.”

“The more usual solution of defrassing and stone replacement is fundamentally destructive, removing the very substance of the building to be conserved. This, in some ways new technique for repair, develops the practice of sheltercoating into a functioning yet aesthetically invisible protection and consolidation for friable stonemasonry. It is adaptable to differing stones and differing environments.”

“Many hands have contributed to the development and the execution; stone conservators, English Heritage architects and conservators, the willingness of the parish to support all of the work and find the necessary finance, Viridor and the HLF who made substantial contributions and above all the expertise and painstaking care over the repairs of Sally Strachey Historic Conservation”.

“The National Churches Trust is proud to be a joint sponsor of these awards, which recognise the expertise and talent of church architects. This year we received entries for some exceptional projects involving Church of England, Roman Catholic and Methodist churches.”

“Evans Vettori Architects are to be congratulated for their bold winning entry which will serve the parish of St Joseph’s Roman Catholic church in Derby and also help make the church even more of an asset to the wider local community. Built on a modest budget, it shows how imaginative modern architecture can bring new life to a church.”

“Beech Tyldesley, winner of King of Prussia Gold Medal demonstrated in depth skill and expertise in their project to repair the tower of St Michael’s church, Othery, Somerset. The extensive works have renovated the ailing tower fabric, greatly improved its appearance and made it secure for many years to come.”

“It was a pleasure to chair and be involved with the judging of this year’s awards on behalf of the Ecclesiastical Architects and Surveyors Association. The range and quality of work being carried out across the country on our church building is exemplified by our Winners and Highly Commended entries. The continuing support of The National Churches Trust with these awards is also greatly appreciated and a testimony to the quality of the submissions received.”

The awards were presented to the winning architects and representatives of the churches at a ceremony held at Westminster Cathedral Hall, London SW1 on Thursday 6 November 2014. 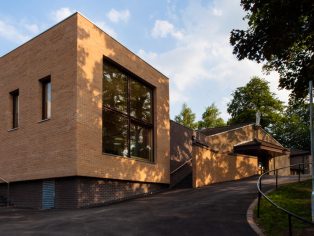