Too green to build?

So determined was a Peterborough school to gain a BREEAM Very Good rating that it had become too expensive to construct. Mark Smulian hears how the architects adapted the design

Any architect in pursuit of a BREEAM rating has a formidable range of technical fixes at their disposal nowadays. Rainwater collection? Solar power? Natural ventilation? The technologies are all tried and tested for anyone who wants to use them. So much has been learnt about how to make buildings more sustainable that it’s surely tempting to try to install as much of it as possible to improve performance.

Go far enough in that direction though and sustainability features can bust a budget, no matter what the eventual payback in terms of lower bills or their contribution to a better environment. That was the problem that confronted building contractor Kier Eastern as it sought to build the new Welland Primary School for Peterborough City Council.

The council’s children’s department wanted a school, its planners wanted a BREEAM Very Good rating, its finance department wanted a budget kept to, and its architects had come up with a design which – while ideal for the BREEAM rating – was going to be too costly. Kier Eastern looked to architect Woods Hardwick, with which it had previously worked, to try to find a solution so that the school could be built to budget and still gain the coveted rating.

The former Welland school stood in playing fields large enough to accommodate a new school. Thus design and construction took place on the new school while the old one remained open. Once pupils had moved to the new school the old one was demolished – for safety’s sake during school holidays – and replaced by a car park, with playing fields being provided by the council on a nearby site.

Peterborough is growing fast and a new school was a priority for the council, but balancing the competing demands for school places, good design and money would be challenge enough without the additional complexity of meeting demanding sustainability criteria.

“There were no particularly unusual conditions to the site. We were brought in by Kier Eastern as there was a design in place by the city council’s architects that was going through planning but which was too costly.

“It needed some value engineering so that it could keep to the council’s requirement for a BREEAM Very Good rating but still meet the budget.”

The main change made was to what Appleyard calls “the quite high level of sustainability features designed into it”.

Woods Hardwick decided the proposed solar attic had to go. It would have been used to get sunlight into the building and then store rising heat and distribute that around the school.

A useful sustainability feature certainly, but one the schools could do without and still qualify for the Very Good category.

“With a bit of other tweaking the building would then come in within the budget,” he says. “We kept the other sustainability features, for example there is a green roof which is doing well.”

Woods Hardwick’s other key change was to opt for heating from a wood pellet biomass boiler for which space had to be found by further tweaking of the original design, though the basic design inherited from the council remained largely unchanged.

The design for an open building so there were no spaces where young children might hide or get lost and there was good visibility throughout the school. Appleyard says:

“There is a single storey roof with a slight pitch at nine degrees to get some space into the classrooms and their ceilings follow the pitch of the roof.”

Welland is built from masonry construction with steel where required to support and retain it. Appleyard explains that the building is single storey and the steel frame, constructed first, provides temporary support for the steel roof structure prior to the block work walls being constructed up to the underside of the steel roof beams to provide the permanent support.

The internal load bearing block work walls provide the main support to the building, with the external walls mainly there to provide an aesthetic skin to the school.

Steel cross bracing was used in the steel frame where necessary to provide the required structural rigidity, so eliminating the need for additional concrete shear walls.

The building is split into sections with structural movement joints in the required locations, which extend through the structure and external finishes.

Outside each classroom is the glazed veranda roof, which is supported off a series of simple columns and roof beams connected back to the main structure. This neat structural solution allows the roof and building loads to be transferred down to and spread along traditional shallow strip footings with nominal reinforcement.

The edges of the green roof are finished with a polyester powder coated aluminium fascia finished in dark grey, creating a strong break between roof and wall.

On the roof, the selection of plant colours used complements the external fabric providing a homogenous colour scheme across the elevations.

Other sustainability features retained from the original design include a rainwater harvesting system, photovoltaic panels, sun pipes, and wind catchers.

The school has two forms of pupils joining each year with a total of 420 places from reception class through to Year 6 accommodated in 14 classrooms.

Classrooms are arranged in pairs for each year group with cloakrooms and toilets sited between each. Welland also has two halls, a food technology room, staffroom, activity space and library together with various storerooms and offices. Classrooms and these other facilities are designed around a single ‘street’, opening off it, along which roof lights enhance natural daylight.

For both the school halls the structure is a series of portal frames supporting the roof with a masonry cavity wall external envelope. A ground bearing, reinforced concrete floor slab forms the school’s floor.

When choosing a palette of materials for the building, Woods Hardwick opted for using facing bricks, render, aluminium and glazing, all of which were picked for sustainability and strong visual appearance.

Windows and doors in the brickwork are punched openings incorporating double glazed sealed units within polyester powder coated aluminium window and door frames recessed into the reveals. Back painted glazed panels have been incorporated within the window units where they cross the floor zones so as to retain the simplicity of design in the ‘open’ building style.

The classrooms are generally white polyester powder coated aluminium curtain double glazed walling units matching the profile and colour of the window units and incorporating the same back painted glazed panels where necessary.

Entrances to cloakroom areas are finished in a smooth, coloured insulated render system to break up the brickwork and give the classroom entrances their own identity. The render is off-white, which provides a strong contrast to the buff brickwork.

Welland’s main colour scheme for the building is provided in the panels, door surrounds and veranda structure and comprises a mix of sage green and a soft grey/blue, which complement and blend with the other external materials and green roof.

Dealing with architects is perhaps outside the everyday experience of head teachers, but Welland’s Head Giles Civil had a positive experience. He says:

“We have found Woods Hardwick to be open, honest and practical in their design approach. Their designs show clarity of purpose, practicality and flexibility, essential aspects to a modern primary school building.” 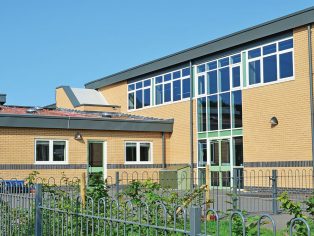 The brickwork, glazing and roof have been designed to work together visually © Woods Hardwick

Inside the school library © Woods Hardwick

One of the school’s 14 classrooms © Woods Hardwick 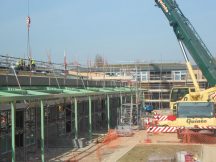 The school while under construction © Woods Hardwick