We Made That have been appointed to deliver the Tolworth Area Plan, a major place-making strategy and masterplan in the Royal Borough of Kingston upon Thames; supporting the growth and development of the area, including some 600+ new homes. The practice will lead a team of urban experts, featuring economists Regeneris, property advisors Aspinall Verdi, planning policy experts Tibbalds and transport input from Arup.

The team has been put together to ensure that the Tolworth Area Plan will be robust, ambitious and positioned to maximise growth benefits for the area in an equitable manner.

Tolworth has been identified as a key area of change in the Kingston Core Strategy and alongside the advent of Crossrail 2 the area will become a focus for regeneration. Located in the southern part of the Borough, the new Area Plan will encompass Tolworth Broadway as the main retail and commercial centre, the landmark Seifert-designed Tolworth Tower, and to the south of the A3 a number of development opportunities for commercial, leisure and residential uses. The Council is playing a leading role in promoting development in Tolworth and has the capability to assemble sites and shape development through its planning powers. The Area Plan will provide spatial guidance on the opportunities associated with strategically significant sites, movement, the public realm and the development benefits associated with the prospect of better connectivity. The new vision will identify sites for development as well as existing assets to help build a successful local economy.

Following We Made That’s success with engaging the public with planning and regeneration projects such as The Open Office at the Architecture Foundation and the Croydon Ideas Shop, the practice will set up a ‘Tolworth Masterplanning HQ’ within the town centre. This will allow the team to be on site and provide a dedicated space for direct engagement with the local residents and businesses.  Opening later this year, the Masteplanning HQ will be a key component in facilitating a productive co-design process with those who live and spend time in Tolworth.

Oliver Goodhall, Co-founding Partner at We Made That, said:

“We’re delighted to be appointed to deliver the Tolworth Area Plan. We’ll be aiming to capture and articulate a strong vision for Tolworth. It’s an exciting prospect to set out a plan for a healthy and sustainable regeneration for businesses and future residents, particularly with a future step change in transport connectivity on the horizon.”

Viv Evans, Head of Planning and Regeneration at the Royal Borough of Kingston upon Thames, said:

“Kingston Council has recently commissioned We Made That to lead on the production of a new Supplementary Planning Document for Tolworth. As well as providing guidance for future developments it will set out a comprehensive regeneration strategy, building on its strengths whilst identifying areas for improvement within Tolworth. The Council will be taking this opportunity to engage with the local community including residents, businesses and developers to get their views on what makes Tolworth unique, and what changes they would like to see take place as part of this exciting project.”

Wider public consultation will take place later this year, with proposals being developed for early 2017. 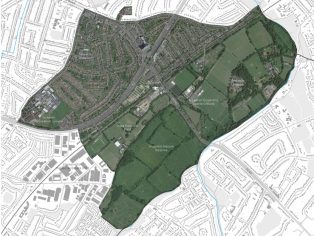